It was a dark, grey morning in Estero Bay. Thunderstorms and winds over 25 mph forecasted. I called my clients, Tristen and Anna from Wisconsin, to let them know the morning Estero Bay trip may be a bust and we would stay in the river. I saw a break in the storms forecasted between 10 and 12pm.  I asked Tristen if they knew how to throw artificial in lieu of getting beat up in the bay looking for bait. He said they had a boat back home and did a lot of artificial fishing. So, as we got started I said we would head up river to get some juvenile tarpon that hang out in some of the bends. We were equipped with 3000-4000 size reels, spooled up with 10-pound braid, 20-30-pound fluorocarbon leaders, 5/0 twist lock hooks, with soft plastics on 7 ft medium light rods. 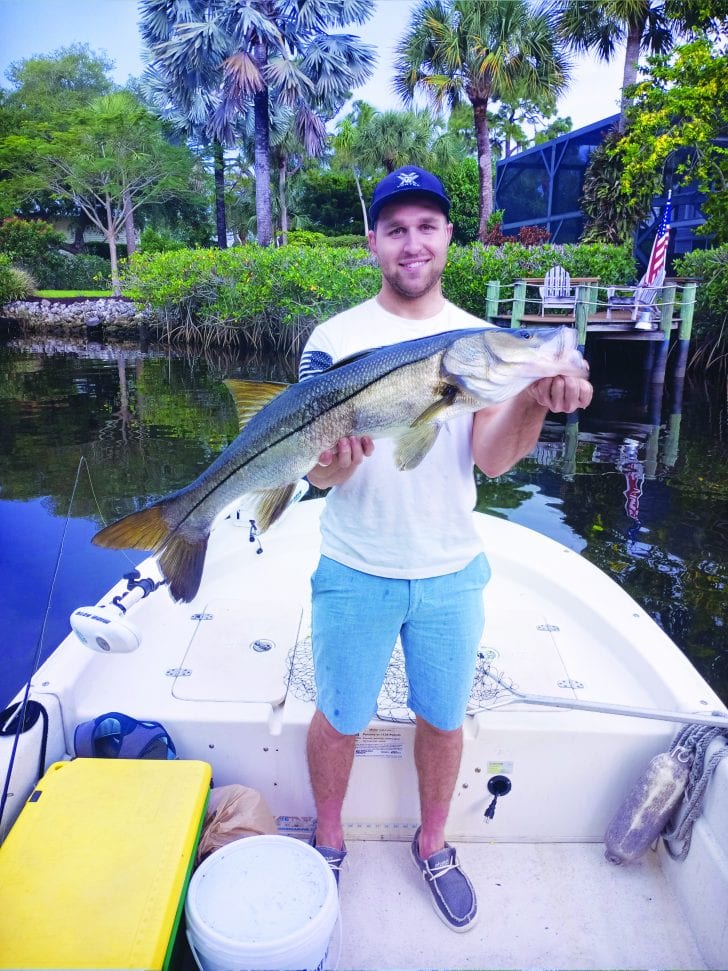 As we pulled into one of my favorite bends, Tristen makes a nice-placed cast at a bankside oak stump that produces fish regularly. KABOOM! The fish got him tangled up in the stump branches, but being an experienced fisherman and with a little coaching, told him to open the bail so I could get up ahead of where the fish got him around the branch.  With a loud shout for everyone to sit down, I goosed the gas and got ahead of the snag. The fish comes free!! With a head-shaking tail walk, we see it is a HUGE snook – we were expecting a tarpon! Tristen’s artificial skills came in handy, since we were using light leader for a fish of this size. With a little bit of running around the boat, we landed the fish. Tristen’s first snook is a fat 36-incher that had obviously been eating well. After we calmed down, we trolled down another 20 or 30 yards. We were surrounded by 5- to 25-pound tarpon rolling all over the place. After about a hundred casts, and 5 or 6 hits on Tristen’s and Anna’s lines, the silver king hits the air!  Tristen jumped a tarpon between 5 to 6 times well over head height before it broke the line. Checking the radar on my phone, we saw there was a heavy band of thunderstorms eminent, so we pulled the trolling motor and idled as quickly as possible to the US 41 bridge.

Tristen and Anna asked if was worth making a few casts while we were waiting out the storms under the bridge. I explained that any of the 41 bridges can produce snook at any time. Sure enough, Tristen lands a 28-incher. The storm passed and we ventured out again. Anna wound up hooking two snook much larger than the 36 that Tristen got. One came unbuttoned and the other broke us off in the bushes. She landed a couple undersize fish but got the full show of jumps and tail walks from the two monsters that came unbuttoned.

This goes to show that even on a windy and stormy day, with a close eye on the weather and a little planning, you can do well in any one of the tributaries that feed Estero Bay. Staying out of the wind and close to shelter can keep you safe and in the fish.