Well, the same weather pattern held up through August, with the weather changing every few days plus a fair amount of rain, especially compared to last year. The surface temperature in the South Basin stayed in the mid-seventies… and the fishing was very good all summer. We saw really good numbers of keeper lakers, many in the 24-26” range plus some fat 27-31” trout. The large baitfish population, smelt and cisco, has the lake trout in really good shape.

Have been catching them mostly on spoons, using larger sizes than normal and expect that to continue into the fall. The lakers were starting to “stack up” as they do in mid-August, and more will join them as we near spawning time. These fish aren’t feeding but can be temped to bite the right offering, speeding up can help, 2.5 mph or more to trigger strikes. We didn’t spend any time fishing salmon in August, just like last year, tough to leave the great laker bite we enjoyed. I believe the salmon fishing peaked in the South Basin last year, heard reports on some nice ones caught up North in August, though. They are out there and those willing to put their time in should eventually be rewarded with a sliver bullet jumping behind the boat.

Our team plans on spending time targeting them for the upcoming King George Fishing Derby as a salmon category has been added for this year. The bass have been biting great, too. One nice change has been the increased numbers of largemouth mixed in with the smallies, and they have been as deep as 40 feet. Bait was tough to get at times, the crayfish were small but worked great. Didn’t use as many Keitechs as the last few years, they seem to be having supply problems. Started using Senkos again and they still work, the little 3” are great for smallmouth, they sink fast and have less resistance on a drift. This will be important in September and into the fall as the bass move deeper, can get them 50-80 feet down.

Don’t forget about the King George Derby to be held Sept. 15-17 with $15,000 in cash and more to be awarded. Go to www.KINGGEORGEFISHINGDERBY.com to register. 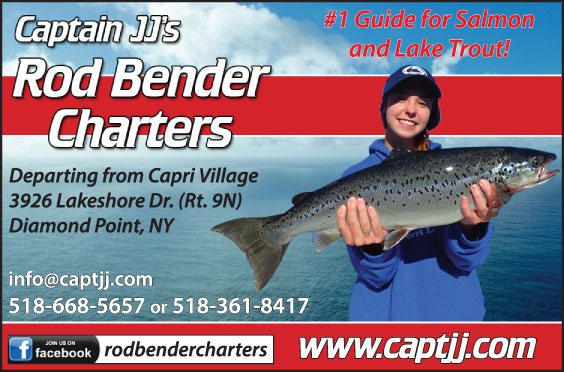