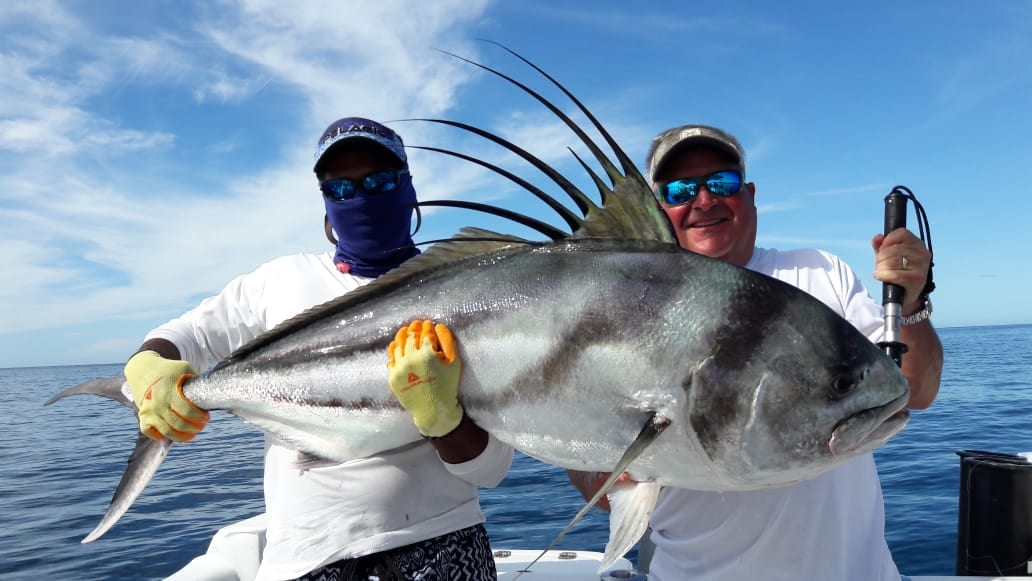 FishingNosara is celebrating our 10th season of charter fishing, and once again the action in Northwest Costa Rica is off the charts!

All five boats are in the water and scoring big for their clients with 51 trips logged in November. Big Dorados are the staple catch this time of year, but it was a welcome surprise to see swarms of Billfish in the mix.

The team nabbed twelve Marlin releases, 24 Sailfish releases, 217 Dorados, and 5 Rooster Fish releases…one of these Roosters was a near-World Record at 72lbs.

\
On November 19, Captain Alex on the Harvesterposted the best trip of the month Terry and Julie Edwards’ group loading up the trophy case with excellent releases.

A 300+lbs. Blue Marlin was the headliner of the trip for these Texas anglers, and shortly after that battle, the 32-foot mega panga nabbed a wonderful Sailfish release. Team Edwards came inshore to finish the day, and saved the best for last…a Rooster Fish weighing 72lbs. according to the Boca Grip (pictured).
The IGFA All-Tackle Record for Rooster Fish (Nematistius pectoralis)is 114lbs., and the second place fish was 85lbs. This fish caught by the Harvesterisn’t far off the second place catch.

Most impressively, the above-mentioned IGFA record catches were posted in 1960 and 1954 respectively…clearly then, this size of Rooster Fish has not been seen in more than 5 decades.

On the same day, other members of Julie Edwards’ family had a big time on the 32-foot Discovererwith a Blue Marlin release of their own; Captain Carlos estimated this fish at 250lbs. upon release.

Also in November, FishingNosara Hall of Famer Bill Harris took to the 28-foot barroom brawler Explorerand opened up her season with a Billfish Grand Slam!

A big Blue Marlin was the highlight of the morning, and was followed by a late-day Striped Marlin. Bill nabbed the first Marlin, and Mark Scott scored the second. A nice Pacific Sailfish by Diane Turner completed the Grand Slam for these Tampa, FL-based anglers.

They didn’t go home empty handed, thanks to five big tasty Dorado catches spread throughout the day.
On the Discoverer, the team of Eli Bedran, Andrew Lipps, Kelsey Harry and Laurie Harry report a fantastic Blue Marlin release (the first of the year for the big battleship) plus six lovely Dorados.

John Purdy, John Van Diver, Mike Pickelsimer and Dale McElroy fished in early November and reported eleven sweet Dorados on ice. The Harvesterhas been itching for action, and found what she was looking for as these monsters topped out at 60lbs. The action was so hot that Captain Alex chose to release the biggest cows so as not to hurt the stocks.

Naturally, we have full reports of all these catches and more archived at Blog.FishingNosara.com, including videos.

January and February will be super-busy and the spring months are already filling up fast. Get your plans together so we can secure your fishing adventure with FishingNosara, the Best Sportfishing in Costa Rica.