I’ve just concluded a fishing trip to the Outer Banks in North Carolina that had been on my bucket list for quite some time. I was hoping to fish on the outer beach but the forecast for high winds and rough seas relegated me to the intercostal waterway and I was forced to find sheltered bays for most of my time. Now I’m not saying I can find fish anywhere but after a visit to the local bait shop, I was pretty sure I could catch something. 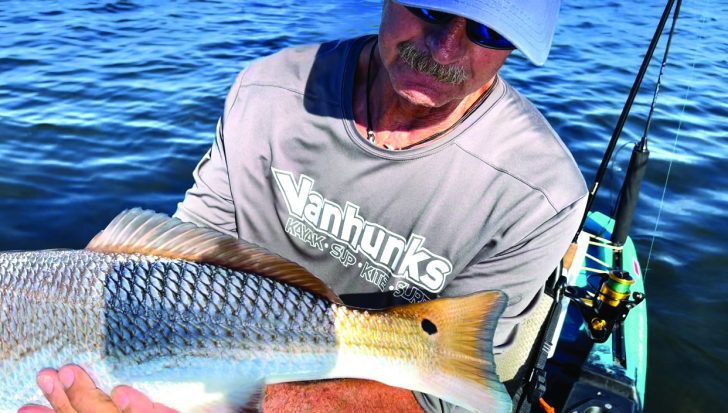 This time of the year on the Outer Banks is a time for Drum, AKA Redfish. As I’ve been fishing for them in S.W. Florida for about twelve years and most recently the Texas and Louisiana coast. I have a fair and broad understanding of how they feed. Of course, any new environment requires a little time to learn and this was certainly true for me here. My first day out was a bust. I did see other kayakers out in the middle of this huge bay that I assumed was deep but a return visit the following day proved to be only about two feet deep and covered in grass. I tossed the usual paddle tails, shrimp imitators and everything else I could think of only to catch one fish all morning, it was a nice Redfish but only one of the dozens I saw. A return visit to the bait shop did the trick. A young woman angler in the shop said her friends all use gold spoons but she never uses them. So, gold spoons in hand and I’m back out the following day. I hook a Drum less than five minutes from launch while trolling and then I recall my friend Pam Wirth using them all the time in Florida and other Gulf states. I don’t catch another Redfish for an hour but I’m convinced that the gold spoon is the trick. I consciously begin to play with the cadence, presentation and location of my casts. I began to replicate what a trolling lure would look like and all of a sudden it was game on, fish after fish. Like all fish they will only take a lure that is presented just right and there it was all along, that perfect rhythm, not to fast, near and through the sea grass with a steady retrieve.

The following five or six days were filled with hot Redfish action, most in the slot size, eighteen inch minimum up to twenty-seven inch maximum.  When the tide would slow down or change and the Redfish bite would cool off I started dragging paddle tails and shrimp imitators across the sandy bottoms for Flounder! Talk about an aggressive fish and fun to catch. Due to the amount of time that I spend fishing, I tend to follow a catch and release philosophy, but the chance to blacken a Redfish back at camp was enough to entice one stunning Redfish onto my plate!

It’s A Wild World-Get Out There!