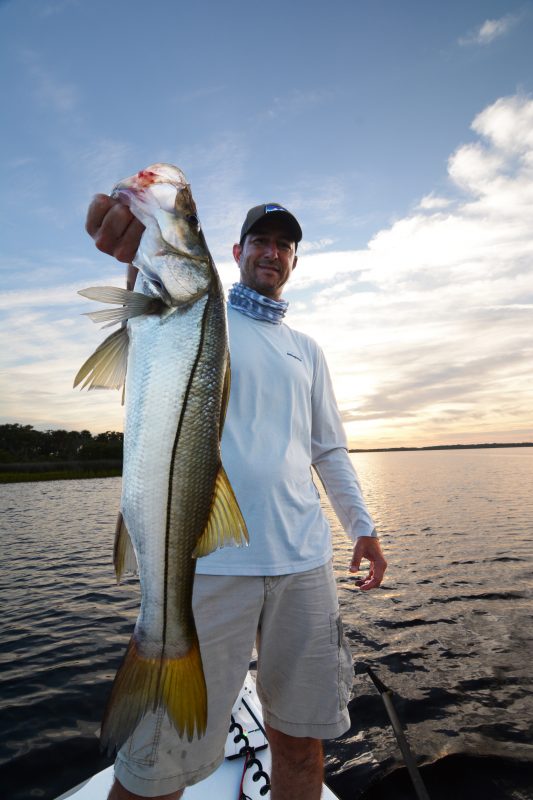 September marks the autumn bait movement that will eventually turn into the fall “mullet run” by months end. Starting your mornings off with topwater lures that resemble a mullet like the Rapala skitter walk or Spook Jr. will produce redfish,trout and snook. Cast topwaters parallel to ICW banks, over flooded oyster beds or docks that are holding mullet to find the “trophies”.

September’s full and new moons brings the tidal waters up into the Spartina grass where Redfish and Sheephead will be found tailing and gorging themselves on all sorts of crustaceans. Bailing from the skiff and wading with the fly rod and a rattle crab pattern is one way to hook up or a live shrimp hooked through the tail with a Daiichi Octopus wide bait hook.

Snook and Tarpon will be in the canals feeding during low light conditions, a live select shrimp will trigger a bite from both species. Lead a rolling Tarpon with a live select shrimp on a Daiichi 3/0 circle hook and a loose drag to help your chances of landing the Silver King. Pitching the docks with live shrimp will get the attention of most linesiders (Snook) especially when encountering a school and the competition factor kicks in. Remember to handle snook with care as they have had a few rough winters and snook numbers are still low.

Area inlets will host Flounder and Bull Reds during the change of tides, a live 6-inch mullet on a fish finder rig will get the doormats to the boat. The fish finder rig consists of a 1/0-3/0 DaiichiD18Z hook with a 10-inch piece of 30lb fluorocarbon leader, a good swivel, glass bead and ¾-1 ounce egg sinker. Once you cast this rig, slowly drag and pump it back to the boat keeping contact with the bottom. For creek flounder a mud minnow or finger mullet on a ¼ ounce Slayer inc. Destroyer jig head fished around creek bends. A knocker rig with a 6-ounce weight a Daiichi 5/0 circle hook and cut or live mullet/ pogie will be the choice set up for Bull Reds at the inlet. Just remember take time to revive these breeder reds and get them back in the water as quickly as possible.

Trout catches can still be expected to be best at night fishing the dock lights, a live free lined shrimp or non weighted artificial tossed up current and drifted through the lights will produce Trout and Snook. Remember to wet hands before handling fish if you plan on doing some catch and release.