The Goliath Grouper, Epinephelus itajara, is a large species, the largest grouper species in fact. While it is known for these fish to get close to eight feet in length and close to one thousand pounds, we typically find ours on the smaller side. We spend most of our time more inland around mangroves, so typically the ones we see, and catch don’t get too big. Although we have seen a couple here and there that we may call “huge”! While these fish were removed from the NOAA Species of Concern list back in 2006, they still remain protected, and no matter the size, they must remain in the water and be released back always. With that, it seems at times the population can explode in certain areas. There are days where we seem to only catch Goliath groupers when out on the water. Sometimes, they even seem to steal our bait from other species that try to get to them! At least in our local fishing areas, it seems their population has been thriving, as every spot we travel to we usually always catch one if not a few. There have been times we have had multiple people on board, and everyone hooks up to a Goliath at the same time! Once, two of us actually hooked the same grouper as the fish ate both our baits at once! Pictures I have included show multiples trips around similar waters where we have caught quite a few, ranging in size. My boyfriend, Kyle, and I ate pictured where we are holding two juvenile groupers, where we had caught many before and after the picture was taken, probably in the double digits for that fishing trip! 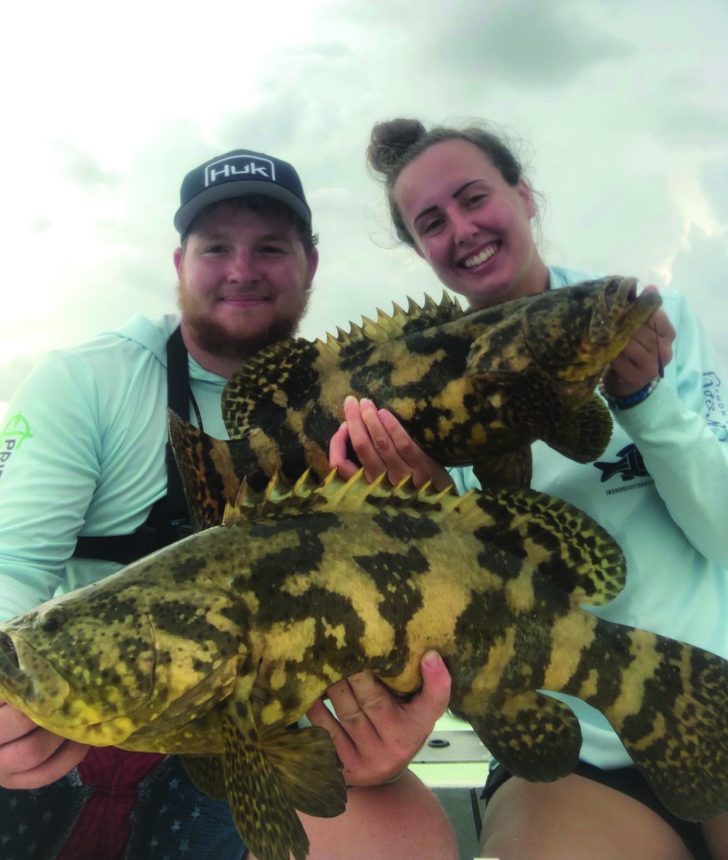 While they are beautiful creatures, they also are known to be aggressive when it comes to territories and food. As mentioned, we have noticed when other species try to eat our bait there have been times when a Goliath may come rushing up to grab the food from them. Another example, we were reeling in our line to recast, and right at the boat a larger one seemed to rush up from underwater and aggressively bite down on the bait.

Often when taking out the hooks to release them, they sometimes tend to try and flop around as well, spiking their fins and flaring their teeth, trying to warn us off. A quick release, as they usually immediately give off a big kick and dive back down. Despite their aggressive behavior at times, they still are awesome creatures, that resemblance their beauty and strength when either fighting them on the line or even just seeing them swim close by.