January is here and things start to slow down a little. Typically, this time of year you want to leave a little bit later than you’re used to, so the water has a chance to warm up a bit. Some fish will fire up when it’s cold like Gag grouper and hogfish but for the most part a fish’s metabolism will slow down and they won’t have to eat as much to keep going. 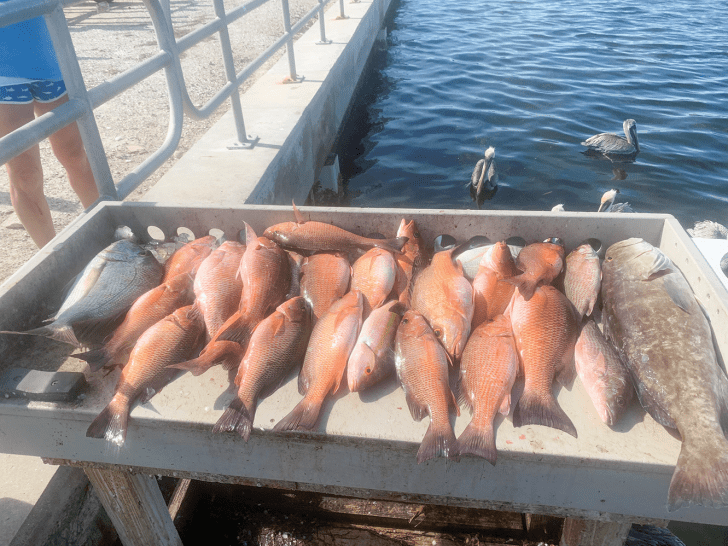 One sure bet this time of year is our Grunt and Porgy bite. These fish are often overlooked not because they don’t taste good but because they are just so darn common. Both of these fish have flaky white fillets, and I guarantee if you cook a grunt next to a mangrove snapper you will never know the difference. For a good grunt bite, I like to find a big rock on a piece for hard bottom, a ledge will work too. These fish will react to other fish eating. Usually once you get a couple to bite they almost form an assembly line waiting to come up. Porgy’s typically like a flat hard bottom. Target large pieces of bottom, these fish like to cruise around but are rarely alone. Baits in the winter will mainly be squid but if you’re targeting other species shrimp will also work great too.

This month’s highlighted trip was with the Wayson crew. We had no real target, just an agenda to fill the cooler and have fun doing it. The weather was completely flat, so we pointed west and stopped on some ledges 25 miles west of Anna Maria Island. Once I was anchored and rigged we started firing shrimp down in hopes of the ever illusive Hogfish, but we could shake the mangrove snapper (what a good problem). In between our insane mangrove bite, we were able to manage a few nice gag groupers and some catch and release amberjacks. The Waysons were a great crew who can really but fish in the boat.