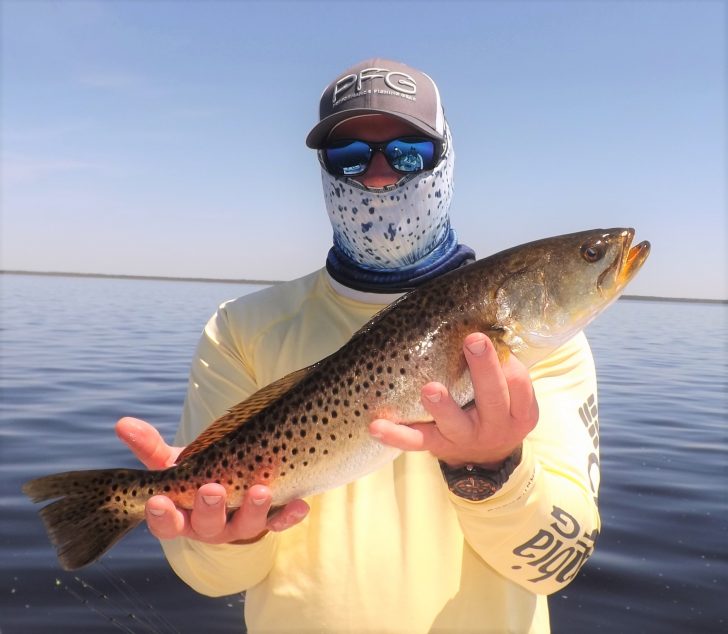 Trout fishing had been great with larger trout being caught out in deeper depths than usual for this time of year. We landed a 24.5 “ trout last week in 6.5 feet of water on an Assassin Sea Shad in Stinky Pink and yesterday had a 25” trout for  Jake Spikes of Alapaha, Ga. (today is May 9) Our Gulf water temps are already 83 degrees and that is warmer than one would expect the second week in May. Limits of trout on every trip has been the rule and I expect nothing less in June.

Most of our tout are being caught on live pinfish under Back Bay Thunders while I had four out of ten trout the other day bouncing Stinky Pink Sea Shads while fishing with Billy Pillow of Woods ’N Water Fishing Team Fame.

We have seen a few Spanish Mackerel yet not a lot of bait yet, which is strange for early May especially with the Gulf as warm as it is. I would guess the tarpon will move through here in late May rather than the third week of June which is their normal schedule.

The floating grass is taking the fun out of throwing a topwater stick bait with trebles but some diehards will still attempt it in June. Bone, and Okie Shad are hard to beat if you are tossing Zara Spooks in June. The 808 Top Pup is one of my favorites for reds and trout.

June will see the same deeper water patterns produce trout as the water temperatures might reach 90 by mid month. Work 5.5 – 7 feet for trout and expect the reds to move to the outer bars and rock piles then join the trout to find a meal if water temps are in the 90’s late in the month.

We have caught only one short cobia and not a single one was weighed in at the local Optimist Tourney May 3rd, held from three ports: Econfina, Keaton and Steinhatchee? Very odd! $500.00 no one claimed…

We will continue to use live pinfish under Back Bays for success in June, on board my One More Cast charters; but I will be bouncing Assassin baits every chance I get.