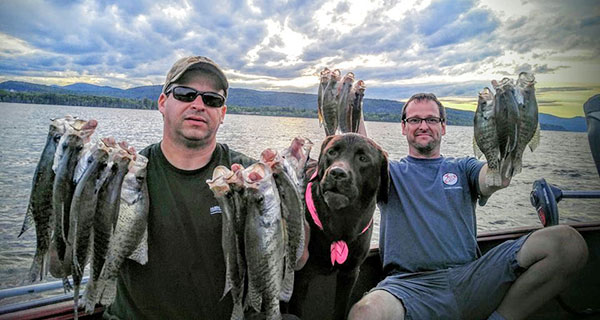 by Shawn Hayes, Will Nolan, www.swillyslurecraft.com, and James Vladyka of www.fishhoundsoutdoors.com

The broad lake bite has been consistent this month. It seems the thermocline has come up a bit from the 85 ft. it was at last week. The fish are beginning to group together nicely. The smallmouth bite is on fire throughout the lake. They are being taken in 20 fow or less. Top water has been effective over deeper water and many largemouths are being taken in 1-3 fow along weed edges and lillies. Typical approaches like Spooks, poppers, buzzbaits, and frogs have been working well for us. The lake trout are being caught in great numbers and some nice fish being reported although the big fish this year have been taken south of Burlington. The alewives have been in heavy concentration farther south it seems finding the fish seem more actively feeding and not as finicky. Typical techniques apply. We have moved to larger presentations and a slower approach with the lake trout. The lake trout although grouped together seem to be on the move. Trolling with riggers and dragging the bottom with larger spoons and stick baits when jigging is slow have produced good numbers. Although not in great number, in the broad lake and The Inland Sea they have been steadily producing some very nice salmon, steelhead and brown trout. Most fish have been caught 80- 95 feet down. The salmon bite has been slow this year due to many factors. There seems to be a 2-year gap missing in our salmon population according to many. The 14-18inch salmon have not been reported much this year.

When I think of Lake Champlain I think of it in two sections, southern end & northern end. To me the divide occurs at the Lake Champlain bridge. Typically, south of the bridge the water is warmer, shallower and often stained due to the clay bottoms. North of the bridge is completely opposite with much colder water temperatures, sandy or rock bottom with depths sometimes reaching over 300 feet. In the past 3 years the water levels have been drastically lower than usual however this year with the amount of rain that we have had the lake is closer to its normal level. The southern end of the lake has been producing very well. The Crappie bite has been hot with the fish piled up on structure. Bass have been holding in the drop offs so fishing deeper for them has been more productive. Pike fishing has also been good casting or trolling stick baits along the outside edges of the weed beds. As for the Northern part of the lake the warm sunny longer days have driven schools of lake trout up on the deep water humps (90 to 100 fow) making for some outstanding jigging as well as bouncing bottom with down riggers, dragging spoons and small stick baits. The salmon bite has seemed to slow up but is not completely nonexistent. 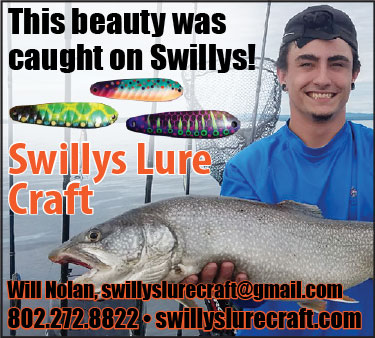