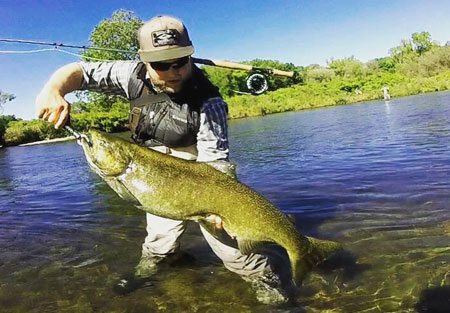 It is just before sunrise on a cool clear early October morning and I am standing on the bank of the Salmon River in The Douglaston Salmon Run (DSR) just outside Pulaski NY. The Weather has been awesome a perfect mix of cooler fall weather and the last blasts of summer sunshine. But it has been dry, very dry and the river is running very low. It has made for a slow salmon season so far. But there are fish in the pool every once in a while one will porpoise in a taunting fashion as if to say “Come on let’s see what your made of”

I have had the privilege of doing some fishing related travel for work and I’m always glad to get paid to fish but since the Salmon River is just 2 hrs. from where I live, I was less enthusiastic about this work/fishing trip then I have been about some others. I had previously fished the Salmon River during the Salmon run a total of 2 times with mixed success. The general atmosphere of the place and its combat style of fishing and fighting for runs not to mention multiple times I’ve witnessed people snagging King Salmon by the dorsal fin landing the fish then looking around to see if DEC was watching and proceeding to put the half dead (sometimes half rotten) fish on a stringer… The whole thing just isn’t my style. But work is work, and I always try to make the most of the moment. I was invited to test some exciting new gear by Douglas Outdoors, and I was genuinely excited to fish in the DSR, I know plenty of true sportsmen that have had great things to say about this section of river.

The excitement was palpable, there were a lot of fresh fish pushing up from the Estuary, and these fish weren’t half dead fish almost done fulfilling their genetically programed obligation to their species. No these were fresh fish, bright and colorful, and full of life. Any doubt that I had about the vitality of these fish was quickly put to rest. On my third cast the line came tight with a 30Lbs king Salmon that proceeded to make a good run up stream and put me into my backing, then with two jumps she turned and ran back down straight towards me the battle ended after 10 minutes and I took the fly out of the fishes mouth, then after a quick picture I placed the big girl in the water and held her as she found her baring’s, after a moment with a powerful kick of her tail she was off to complete her life cycle and replenish her race. I continued to catch fish all day, and out of 9 hook ups I was able to bring seven fish to the net, the best part of all of this to me was that every single fish I landed was hooked perfectly in the mouth. Dispelling the old saying that “Salmon in the river don’t eat” they were defiantly eating and weather it was that they were just tasting everything that looked like it could be food. More likely they were a bit pissed off and decided to take out their frustration on my flies, in any case they were eating the flies. And I was having a great time catching these awesome fish! Sometimes I would just sit on the bank and let my arms rest, I would watch in awe as the fish pushed up the river, there were so many fish that sometimes they would create foot tall wake in the pool.

This trip really changed my mind about Salmon fishing, I’m the kind of person that would be almost as happy to just sit and watch these fish move up through the river, let alone catch them on a fly! The DSR is beautiful, they do an excellent job of maintaining their 8000+ acre and the river that flows through the property, it is clean and not nearly as crowded as the rest of the river. I’m not sure the next time I’ll be up on the Salmon River, probably not until November and then I’ll be fishing for Steelhead. The whole river can be good for Steelhead, but if you want the best chance for fresh chrome then the lower river is the way to go. I have a feeling I’ll have to try out the DSR for Silver Bullets this winter. Otherwise I’ll fish Sportsmen’s, and the Lower Fly. I’m the kind of fishermen that needs a balance of comradery and solitude, some days more of one then the other. So if I see you on the river and give you the stink eye, don’t take it personally I’m probably just lost in my head somewhere. I might be pondering why a salmon on its way to die would eat my fly? It’s a good question. But then again who cares, if the fish will eat then it is good sport. And if you get a Coho salmon to eat then you’ve got yourself a good dinner, and a little good old fashion fun. Fish more, Catch more.