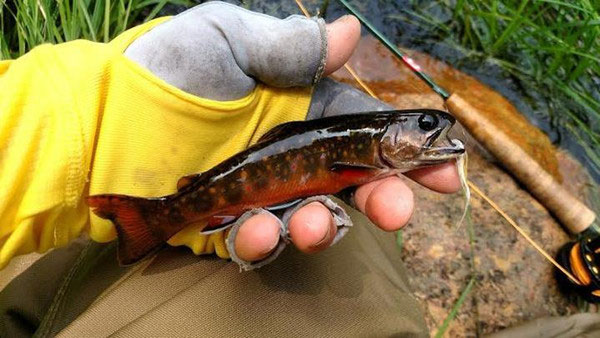 Here it is, the end of trout season only days away, and I couldn’t find a single person to make the near two hour drive up here with me. They all scoffed at the idea. “The salmon are just starting their runs and you want to go ride almost two hours up to some little stream trickling through the woods where you’re gonna catch fish that are only six or seven inches long?” I give a sideways grin. “They can be bigger” I shoot back, “Sometimes ten or eleven inches if you’re lucky.” Then they’d be lost to the thoughts of bigger fish. They’d tell me I was crazy and then start talking about rigging up big rods and getting there early to get a good spot on the river before the crowd really got bad and about how the salmon really don’t hardly ever actually eat. But that you weren’t snagging them either, you were simply hoping to line them across their mouth to set a hook in it that happened to have a fly on it. And that’s about where they’d lose me. Actually they’d lost me when they started questioning my motives of remote streams and little trout. But it didn’t matter, I was simply asking if they wanted to go out of common courtesy. Going alone had always been my hope.

On the stream I find myself standing knee deep in the water, half ducking behind a boulder the size of my living room couch, feeling nearly just as comfortable as if I actually was at home on the couch. I’m trying to get a good look at the run I’m about to cast to without spooking the little brookies that I figure have to be in it. Up here when a spot looks this fishy, I’ve found that it usually is. It’s really something when you think about it all.

Twenty years ago the PH levels in these waters were so low that you would’ve been hard pressed to find much life in them at all. Rolling over rocks wouldn’t have shown you much bug life, crayfish would have been nowhere to be found, and in turn, brook trout were probably scarce at best. These waters haven’t been stocked since the ‘60s, but now that the acid rain damage is healing here they are, shooting out from around boulders, darting from pocket waters, and zipping across pools to chase down the streamer on the end of my 3wt. I wonder where they went when the waters got so bad, if most died off and these are the descendants of the hardiest that toughed it out or if they all moved farther upstream, somewhere we never went to look for them, like hermits retreating from a cruel and strange world and only now repopulating the waters after they became healthy again. There’s always the possibility that some water somewhere else was stocked and some of those fish made their way here, but it doesn’t matter. They’re wild now. The four inch brookie I caught first thing proves that.

I make a cast from behind the couch sized rock. The little black and gray streamer hits the water with a dull slap above another boulder across from me and I strip line fast as the current carries it past. I never see where the fish comes from, but the line goes tight and thin graphite bends, the line cuts the water in zig zags and I end up with a brightly colored brook trout maybe seven or eight inches. A burnt orange underside and flanks with parr marks scattered with spots, the blue halos around red are the most impressive. It rests on the bottom next to my boot but regains its strength quickly. It shoots off into the current and disappears. I manage one more from the spot before I move along.

Hopping from boulder to boulder in some places, pushing quietly through waist tall ferns beginning to lose their green to fall in others, I can’t help but be distracted from the fishing by the almost complete quiet. Except for the sound of the riffles of tail outs, the wind every now and then that sways the top of a tall pine, or the scratching of leaves as they fall through the branches to the ground or to the current where they’re carried away downstream, there’s no sound. Just me and the woods and the trout.

I haven’t seen so much as another boot print since I left the Jeep parked on a dirt road, but I did see tracks left by a bear where it crossed the stream and walked out on a gravel bar, and deer tracks on the game trail I use to skirt the edges of the water now and then. I haven’t seen any moose tracks this time but I know they’re around. No trash, no fishing line tangled in tree branches hanging over the middle of the water anywhere, no worm containers. No Styrofoam coffee cups left on the bank.

I make my way out and around a massive chunk of bed rock that chokes off more than half the width of the stream and on the other side of it I find yet another fishy looking spot, so of course I cast. And I again feel life on the other end, the rod arches, the tip dances, and in the end I quietly release another colored up brook trout, this one probably close to eleven inches long, a trophy on a stream like this.

Why would I want to come all the way up here for these little fish when I could be fighting salmon, or other fisherman for three feet of river bank? There’s no doubt I’d catch bigger fish there, and harder fighters. But it’s quite possible that it’s not just the fish I’m after, but where I go to find them being equally important. My one hope being that the salmon circus crowd never catches on to my secret.