Why bring a slingshot to a gunfight? Well I’ll tell you.

As you know, I have a Miami based charter boat and we are always concerned with keeping our guest entertained. For this reason we will often put out a small bait to catch lesser gamefish between the primary targeted species. This past fall our clients caught numerous skipjack tuna and some blackfin tuna by fishing one to two inch pilchards on 3/0 light wire circle hooks tied to 20 pound mono leaders. These rigs were fished on 3500 Penn Battle 2s with 20 pound braid. The battles with these fish were like fighting bonefish and produced delicious fish dinners. Numerous mahi also fell to this approach.

When we go trolling, we always put out the smallest model of a Billy Bait. This small lure is today’s equivalent to the 1/4 ounce trolling feathers of the 60s and 70s from my past. Over the years, these small trolling lures have produced tens of thousands of little tunny, assorted tunas, mahi from 1 to 40 pounds, wahoo, kingfish, barracuda, sailfish and even blue marlin.

And then there is live shrimp. Back in the 60s and 70s, we used to target big tarpon with mullet and pinfish. One day I had some live shrimp left over from a bonefish trip. The tarpon were solid, but not biting. After hours of boredom, I baited a light rod with a live shrimp in hopes of at least catching a blue runner. I was shocked when a 100 pound tarpon ate the shrimp almost instantly. We have targeted big tarpon with medium sized shrimp ever since.

An old time guide named Muriel Harmon taught me that Spanish mackerel were easy to catch on small live shrimp when nothing else could get them biting.
So, next time the fishing gets boring, try going Small. 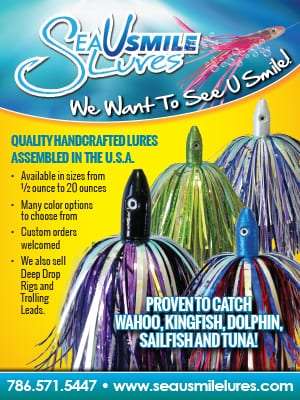