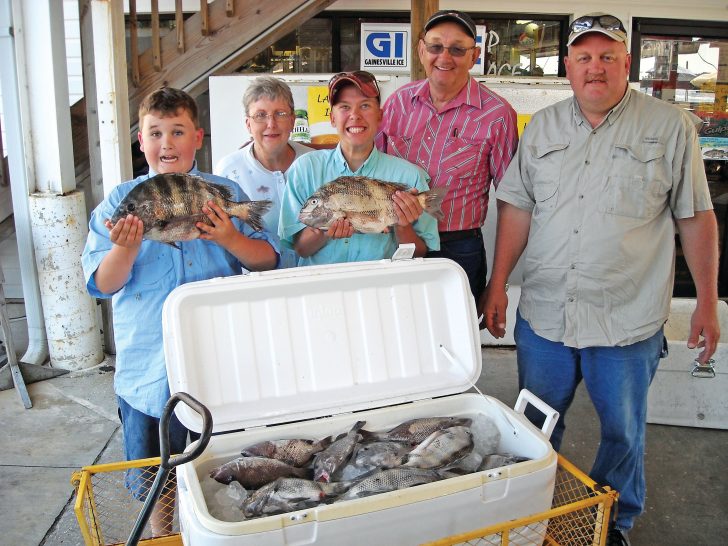 For two reasons, I’m happy the sheepshead limit has been reduced. Most importantly, it is wrong to exploit any fish when they are actively spawning.  When one large female is taken, not one fish is removed from the population, but potential thousands of post-spawn survivors.  Female sheepshead produce millions of eggs per spawn –there are multiple egg deposits during spawning– and a mere percentage make it to adulthood.  The act of tossing a large egg-laden female in the fish box for accolades at the dock is a sure sign of the need for attention, neglect to educate young anglers respect for natural resources, lack of self-control, ignorance of life cycles, and I could go on and on.  Watching wads of eggs wash down the drain holes on fish cleaning stations sickens me, especially when grown men brag about the largest fish, as 10% of the weight washes away and a potential ton of future fish never get a chance.

Secondly, it doesn’t take as much time to make the “limit”, which means more time to pursue other good eating fish, such as sea bass.

From the first paragraph, you may interpret me as some type of liberal Eco-Nazi.  Far from the truth.  I love catching and eating sheepshead!  I just don’t want my zeal for something to ruin it for others in the future.  So, I simply keep the smaller jakes for eating, and toss back the big girls.  They eat just as well.

One of the best, and common ways I rig for sheepshead, is  knot—no swivel– a 12-inch section of 30-pound fluorocarbon to the mainline.  Braided mainline is better than mono.  Slip an egg sinker, of appropriate weight to just hold bottom, to the leader, then tie on a 1/0 long shank offset hook.  This rig—called a knocker rig– is to max sensitivity on your end.  Sensitivity to a sheepshead bite is very important.  The knocker rig is the cheapest means to go as well.

The best baits in choice order, are live small to medium shrimp or fiddler crabs, fresh cut shrimp pieces, and frozen shrimp.  When the bite is strong, the bait is irrelevant; it simply just needs to be there.

The bite of sheepshead is a delicate tap.  Set the hook before you feel it.  It does take time and bait to learn how to hook them before bait is stolen.

Now to sea bass.  They are also in spawn, but the male to female situation is vastly different.  Not enough space to explain.  Use the same set-up as for sheepshead, except switch to strips of squid once the extra sheepshead bait is used up.  Squid is more durable and cost less.  Also, fresh cut bait is outstanding.

Sheepshead season is wonderful time to have a memorable fishing trip with family and friends, while bringing home some delicious fillets for a fish fry.