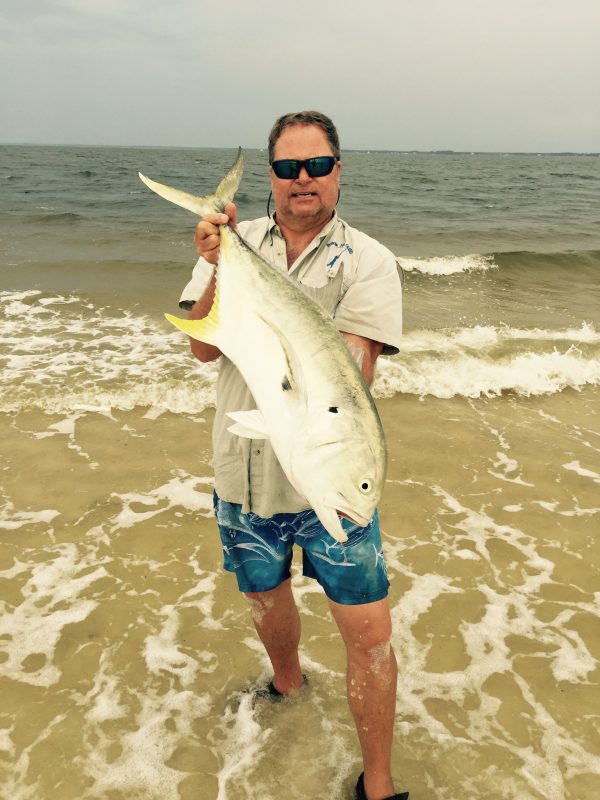 The surf and pier fishing report for August is here! The mullet run cranks up this month, and it will be game on! The Redfish, Blacktip Sharks, and the Tarpon will be in the surf and at the end of the pier.  Just cast net some lively mullet and cast them right back out. Bluefish, Ladyfish,Trout,Spanish, and Jack Cravelle will also be looking for a frisky mullet to chomp on.

This is also my favorite month to catch big Bonnethead sharks up to 26 lbs. Keep in mind that the current world record is 28 lbs. They are a blast on a surf rod. Since they are crab eaters, they are also great on the grill or as deep fried shark McNuggets. To ensure your catch, rig heavy. A sinker slider rig tied from 100lb mono with a 5/0 to 7/0 is the best.  Tip it with a half of a blue crab and hold on.

If you are headed to the pier, I would suggest you spend a little time on the beach and collect some sand fleas first. Here is the youtube video that is a great tutorial if you need a little help with catching fleas.

These little sand fleas are all about matching the hatch. Almost every fish that swims in the surf zone will eat these baits. Recently I caught the biggest drum I’ve ever caught…on a flea!  Just this week I’ve talked with several buddies that have also had nice catches on fresh fleas. Enough about fleas…get some!

The whiting bite has continued to be very good into the heat of the summer. Clams, fleas, and shrimp have all produced well but my favorite day in and day out has been fresh clam. The best place to get these is your local retail seafood dealer. Get the biggest ones that you can find. This bait also matches the hatch which is the small donax, periwinkle, clams that are abundant in the surf right now.

This is the only month that have a shot at a permit. So if you get a blistering first run don’t dismiss it as a shark, huge ray, or some other mystery fish. It just may be a big permit. So loosen your drag and enjoy the ride.