There is nothing like these Air Force Radio/Relay Towers in most of Florida, except the Panhandle has some too. Standing regally, about 150-feet above the waterline, the narrow towers attract flocks of frigates, pelicans, terns, gulls, and lots of divers & fishermen! Below, the magic begins, as 4 coral and sponge encrusted diagonal beams spread out and down to about 20-feet, where vertical legs and horizontal beams drop to the bottom, which is usually limestone live-rock with scattered metal debris. 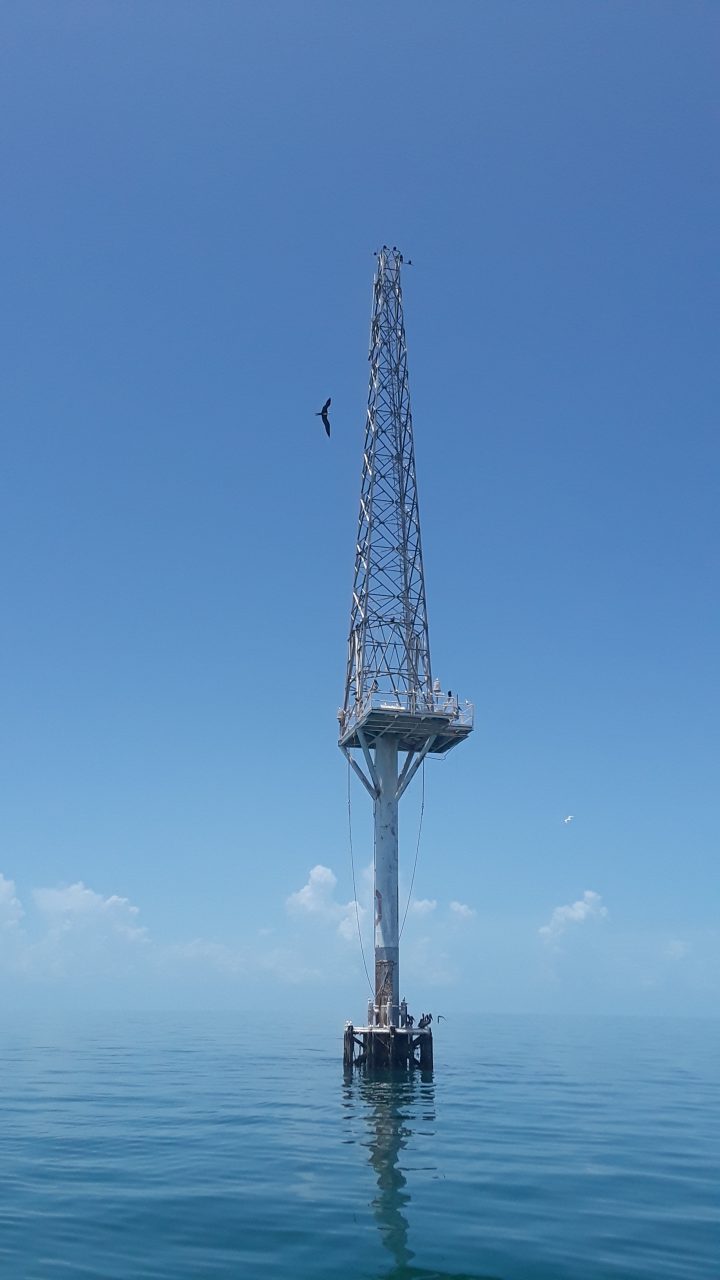 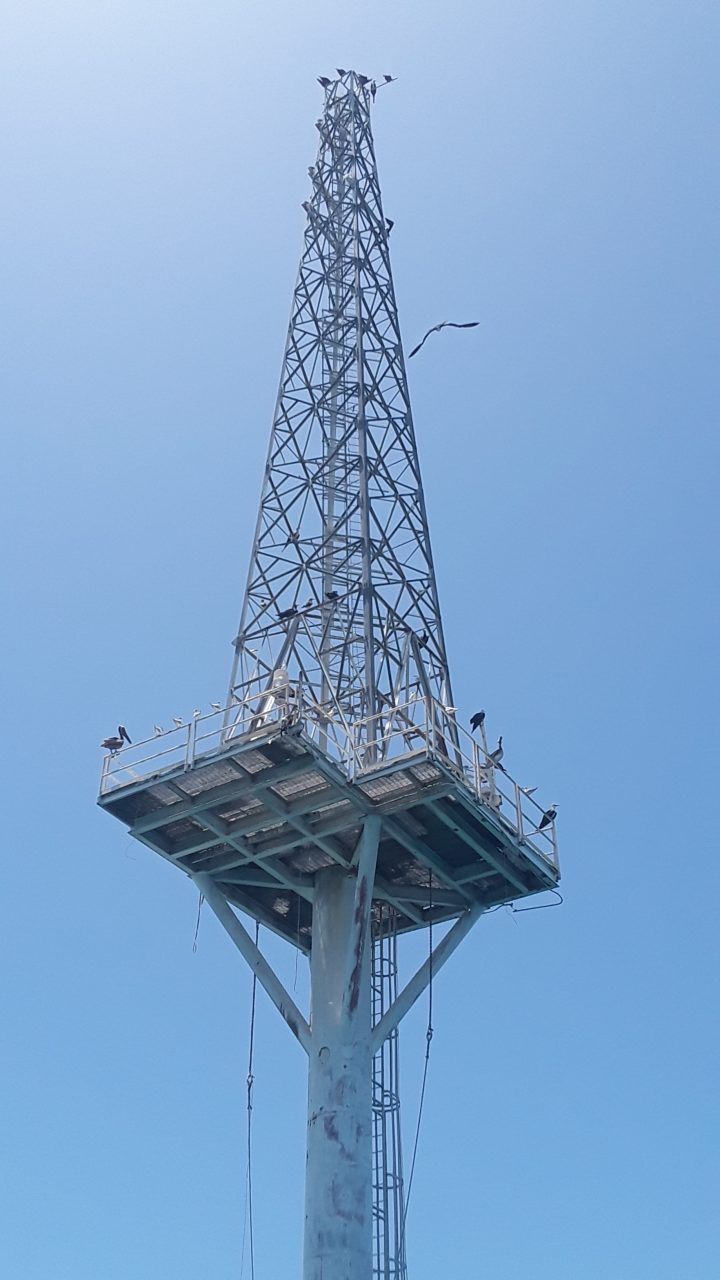 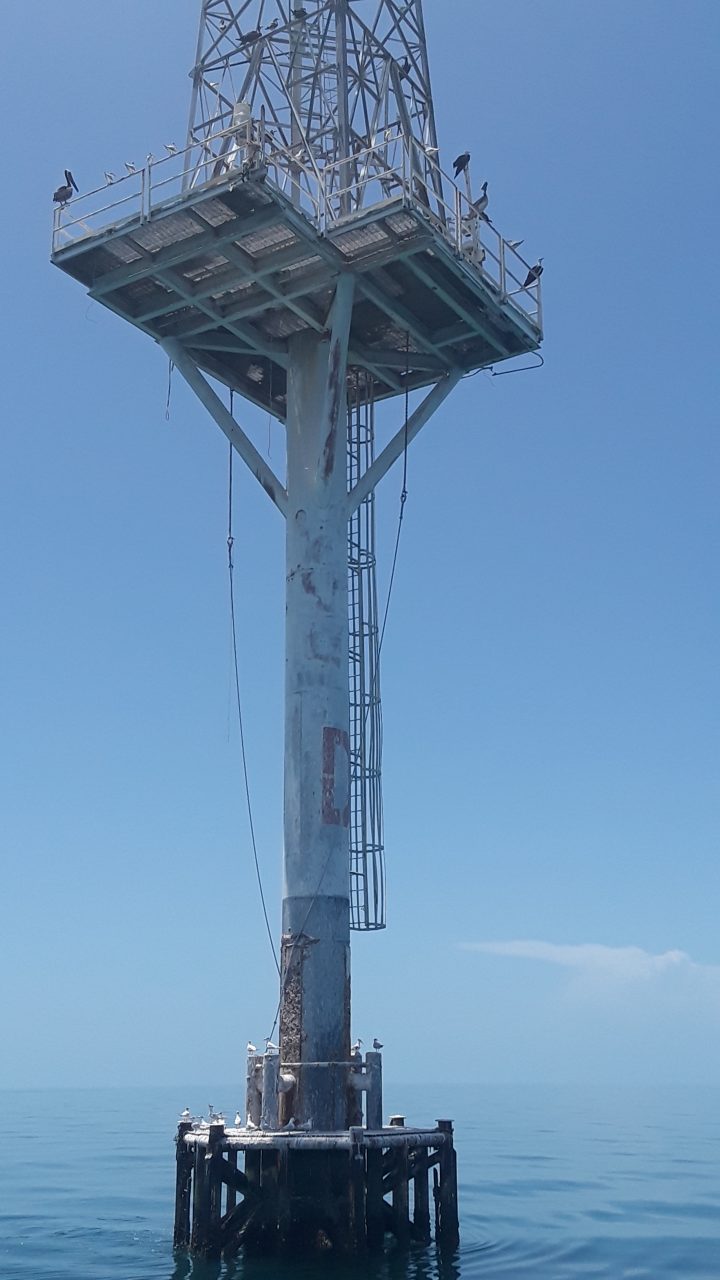 My first descent on a Tower was in spring of 1992, freediving on the deepest (127’) and farthest offshore (100-nautical miles) from Fort Myers Beach. The W-Tower is almost to the Dry Tortugas, so it was crystal clear from the surface on down and loaded with bait, cudas, AJs, and monster mangrove snappers. I had one fin tip still in the air when I shot a 10-lb mango and the scuba divers onboard changed their minds quickly and joined me! It was an epic trip, boating multiple AJs, snappers and scuba divers saw a big cubera and black grouper on the bottom, but they bolted.

Towers start 24 to 27-n.miles SW of Marco Island, then spread 21n.miles apart on a perpendicular grid. Most divers hit the R-Tower first in 69’, or if they made a Tortugas trip from Ft Myers, then dove the L-Tower in 102-ft and the Baja California wreck, about half way home. Two of the remaining 5 Towers, P & T in 66’ to 69’ are mostly dove on trips from SW FL to Key West. They’re in greener Gulf water, but have good spearfishing visibility, around 20’plus and the usual pelagics, like AJ, AP, and sometimes cobia. The D-Tower is only 30’ deep and the closest to land at 20-n.miles from Goodland & Everglades City, so it’s fantastic hook & line fishing, but the visibility of only 5’ made it too tough to spearfish freediving, when bringing my boat around from Ft. Lauderdale this summer. I saw big Goliath groupers and small fish, but  the smart gags, blacks and snappers stayed out of site.

The S-Tower is tough for many to reach because it’s 65-n.miles from Marco and 42-n.miles from Key West, and not in line with either, or around other sites. It’s the last of the Magnificent 7 Towers to elude me, but it’s not too out of line from the Dry Tortugas to Marco Island. It’s my goal and it’ll be great just because it’s off the beaten path, and 82’ deep so it’ll be clear and fishy!