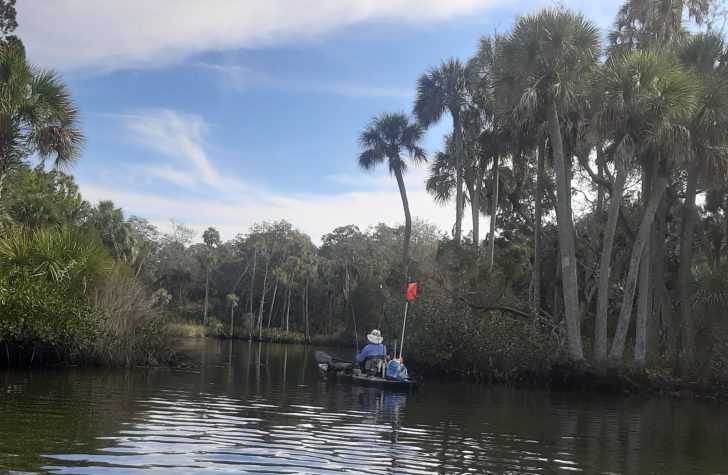 Welcome back yak fans.  This month I’m writing for the shallow-minded among us.  Yup, I’m talking skinny water fishing.  We’re going back to Aripeka, but first, I ask with some trepidation, “Is 2020 gone?” My lord, what a year, can’t see my grandkids and had to miss my father’s 94th birthday. Let’s put a stake through that things heart and bury it DEEP!! And here’s hope for a better new year.

Indian Bay is hot right now, so here’s the skinny.  P.J. and I planned a trip with a launch at Norfleet’s for a Sunday morning, but Mr. Weckbacher’s alarm must have malfunctioned.  I launched at 6:15 a.m. and he showed up at 7:30-ish.  Sorry P.J.  The truth is the truth, but he paid for his transgression; he completely missed the morning trout bite.

The shallow bays were filled with mullet and mixed in were “ginormous” trout.  I hooked and lost two in the mid-to-upper 20s before landing a fat 24-incher.  Free lined Gulp shrimp in the glow-on-white color seemed to work best. Work it back slowly.  I had several follow it to the boat.  I was fishing the last of the outgoing, and followed the mullet until they disappeared, along with my bite.

At this point I connected with P.J.  Talk about a day late and a dollar short – but he redeemed himself later.  The tides were such that a trip to Rocky Point would have been non-productive, so we paddled over to Cabbage Island. (Who makes up these names?)  Other than schools of lady fish, it was pretty quiet.  We headed back to the inside.

On the paddle back in, I mentioned that my younger daughter and her boyfriend were to have come out with us, but he couldn’t get out of bed either!  P.J., who knows my older two, asked about my younger daughter. I commented, “You may have you seen her on the PHCC commercial.”  His immediate response of, “You don’t mean the blond, do you?”  I asked,”How do you remember the commercial that well?”, and “Why the ‘You don’t mean the blond?’”  P.J.’s response of, “Wow man, nothing, I mean, if that’s your daughter, take this the right way, but you’ve got a great gene pool.”  I let him live (on probation).

Ok, back to fishing and the real reason for this article.  We paddled back into the shallows and halleluiah, the reds are back.  As the tide was coming in, I was working a Bodonk-a-Donk and stirred up some big wakes.  I tried a jerk shad and just spooked them again, finally resorted to a free-lined Gulp and some cut mullet.  The mullet won.  I picked up a 29-inch red out of the pack, and settled in to catch some more.  The tide was moving well, and P.J. and I must have seen four or five schools holding 20 plus reds in the upper slot.  These fish literally rocked my boat with their wake, but would they bite?  We sat there and watched over one hundred reds swimming around us and they had total lock jaw.  Of course, we tried every lure we owned.  What I would have given for a dozen shrimp, but for the first time in years, I didn’t bring any!