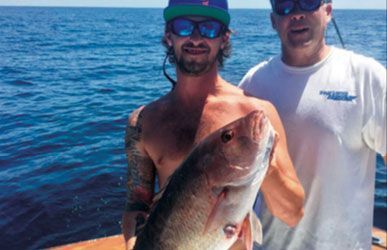 Calmer seas prevalent during July allow offshore anglers the choice to fish from the beach to the Bahama bank. From the tip of the jetties to running 100 plus miles out to chase packs of tuna or anywhere in-between can be a

viable destination depending on what species is being targeted. Immediately off of the surf anglers can land some of the biggest fish within sight of the beach concessions. Last month large King mackerel up to 40lbs, jack crevalle and tarpon were be found in 30’ to 70’ of water off the inlet following the schools of baitfish. Slow trolling live pogies, blue runners, mullet or dead ribbonfish in front of the inlet on the outgoing tide is the closest place to begin. Light 3lb. wire leaders with a chain of small treble hooks to prevent mackerel cut offs are preferred rigs fished on 12-20lb. tackle. Employing a delicately light drag setting makes the long runs exciting but also ensures the hooks do not pull on the bigger fish that may be in the 40-50lb. class.

DRIFT FISHING OR ANCHORED, ANGLERS USING CUT
HERRING AND SQUID ON DOUBLE RIGS WILL CAPTURE
MOST OF THE STRINGER FISH INCLUDING LARGE SEA BASS
AND A VARIETY OF SNAPPER.

Fishing on the near shore reefs and artificial structures, anglers will find a variety of migratory species. From the Port Orange Bridge structure to the Cracker, Rebel and Nth East Grounds an inshore route can produce great action trolling. Kingfish, cudas, bonita, amberjack, cobia and a few dolphin or a sailfish can be caught working the inshore loop. Trolling two deep lines (one at 15-25 feet, the second at 30-50 feet deep) on planners or downriggers using spoons, mullet, or bonita strips is very effective. Double ring 3 1⁄2” Drone spoons in silver, green or red colors are longtime favorites on the deep lines preferably using six to eight arm lengths of 80-100lb. monofilament leaders. Pink, white or blue and white sea witch skirted ballyhoo or bonita strips on the surface with light wire and a double hook rig will keep the riggers busy .

Drift fishing or anchored, anglers using cut herring and squid on double rigs will capture most of the stringer fish including large sea bass and a variety of snapper. Use smaller 3/0 hooks with a little piece of squid or fresh bonita chunk to capture triggerfish or red eye snappers. July normally marks the summer thermocline return. Amberjack, cobia and snapper will mostly be found holding in the warmer water above the frigid summer thermocline that drops bottom water temperatures below 60 degree range. Deploy light tackle drift lines with chunks of herring while chumming to catch the mangrove snappers up in the water column. Bottom fishing enthusiasts received terrible news in June from the Federal government. July dates anticipated will not be released that allow fishermen to keep some of the abundant red snapper which keep devouring baits intended for other fish.

East side tuna opportunities are exciting to attempt on the days with light breezes and flat seas. These conditions are optimal that allow anglers to find the birds and tunas nearby. Start looking for birds on the east side of the Gulf Stream (70-80 miles offshore) where the water temperatures cool slightly away from the Gulf Stream. High power radar has replaced binoculars for spotting flocks of birds which offers the best chance for a bite. Deploy a spread of lures or ballyhoo rigs on fluorocarbon leaders ahead of the active birds and be sure to not troll through the middle of a pack. Make wide turns on the outer perimeter ahead of the action to present the long running baits in the feeding frenzy. Keep the boat ahead as normal at the first strike to turn a single bite into multiple hookups of tunas.