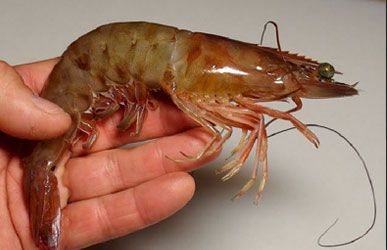 What a season Volusia County had in both Edgewater and Oak Hill. Albeit wonderful, the season got real small in April cheating us out of a few more weeks. Folks were still chasing in May and were blessed with some decent size mixed in among the dinks. However, Brevard has been the frustrating County in 2015. Typically, full pulls come ringing in December and this year the pulls rang in March. But, the good news is shrimping has

continued into June despite the massive mosquitoes. Railroad Bridge and Haulover Canal seemed to produce after a low came through blowing a West counter-clockwise wind. The problem has been inconsistency in both locations. One night 2-5 gallon of large-jumbo are caught and the following night a gallon or less. We expect there to be activity well into July for the warrior that can brave the onslaught of blood sucking insects. South Brevard is starting to produce some count for the seawall trappers but Eau Gallie and Mather’s Bridge have many veterans discouraged. Those on boats near Mather’s have reported a “some gallons” but the where’s remain close to the vest. The Melbourne area die-hards are ranking 2015 as one of the worst seasons on record. They cite the “NO Fishing” signs on the North side of Eau Gallie (kids were killed there in 2012) as a reason. The South side has never produced shrimp as abundant as the now closed North side. Titusville pier has been inconsistent but when it turns on they are reporting 40-100 counts. The summer is here and the runs in Brevard are going to be sporadic with smaller sizes mixed in. The summer shrimp run that starts in S. Daytona Big Tree typically starts by mid July. We have retired our winter gear and have dusted off our shrimping cast nets. There are scouts out in Daytona and Jacksonville, and so far we are not hearing any reports of summer shrimp. The summer shrimp are the white shrimp with a blue and green tail. We shrimp summer shrimp in Volusia & Flagler County all the way up to Jacksonville through late summer. Summer shrimp are caught in the day time and we mark them on our fish finder sonar. They walk on the bottom of the river and inter-coastal areas. We expect to hear the summer run as started any day now. For up to date intel reports, visit the Academy Of Shrimping or visit our facebook group, “Florida Shrimping Academy – Tips & Tricks”.