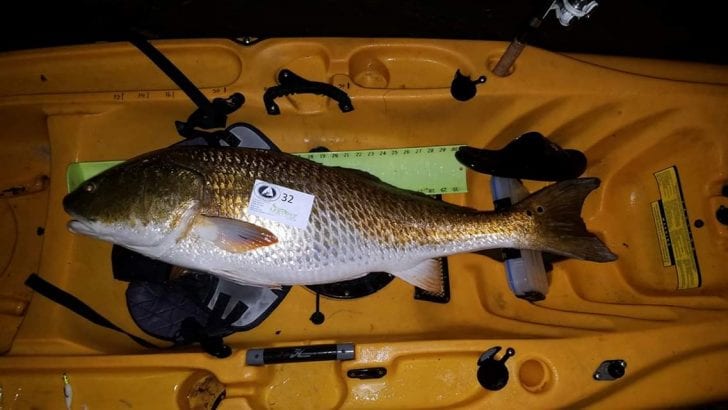 I believe it is well documented by now that I fish a lot at night. I enjoy this tactic because it doesn’t require a whole lot of finesse or skill, just time and effort. I have put in my share of both. Be advised, this story is not going to end the way you think it might. It is pretty funny though, so feel free to laugh at along!

Three years ago Mobile Bay & surrounding waters were the greatest places to catch bull redfish at night; you’ll never convince me otherwise. It was dry and warm summer thru new year. As such, giant fish just pushed right up into our estuaries. You can always catch bulls in the fall, but this year was different. It was akin to shooting fish in a barrel. I do not fish tournaments, it’s never been my thing. Pensacola Kayak & Sail was hosting their annual winter fishing tournament. It’s just a week long, catch-photograph & release, low stakes tourney that is mostly for fun. I went out fishing, but was not in said tournament. Naturally I caught a huge redfish, just under 40”. I went home happy with my catch and convinced I could duplicate those results the following night. I joined the tournament.

The following night I paddled through a foggy bay to my favorite dock. Sure enough the water had the appearance of hand grenades going off as huge reds consumed every creature under the lamp. I made a cast, oomph! That’s the sound you make when a 44” plus bull red nearly breaks your rod in half upon striking. Game on! My drag was screaming. This fish was in control and I couldn’t do anything with him but hold on. Luckily, he made a run to open water. Would you believe he pulled me all the way back to the launch? That’s exactly how it happened, he was played out at the launch. In disbelief of what just happened, I hopped out and grabbed my measuring board. Did you know measuring boards only go 30” or so standard? I didn’t either! It never occurred to me that a Hawg Trough that I bought for river fishing was too small for the sea monster I was chasing tonight! The point of a CPR tournament is to keep the fish alive. I had a family member within a few miles, but was unwilling to harm the fish or, in my opinion, break the rules, to move this fish for an accurate measurement. I called everyone I could think of to come help me, but it was no surprise that at 2:00 am on a weeknight nobody answered. Out of desperation I got very creative. I took pictures of the fish in my boat contrasted against many objects. I realized my flip flop could be measured! Eureka! I took a picture of the footwear beside the ruler, then…well enjoy the picture.

When it was all over, I didn’t win anything. Get this, the 1st & 2nd place fish were both smaller than the two previously mentioned! All I got was a loser’s story, and a pretty great one if I do say so myself! I missed out on maybe a couple hundred bucks, but more painfully the right to brag about winning the first tournament I ever entered. For me the take away was clear. I am not a tournament fisherman. I was absolutely sick for days over the mishap. Some tournaments have real money and prizes at stake. Fishing is one of my favorite things in the world. In order to keep it pure, meditative & fun I refuse to compete. That’s just me though! You guys out there getting after it, God speed and good luck!