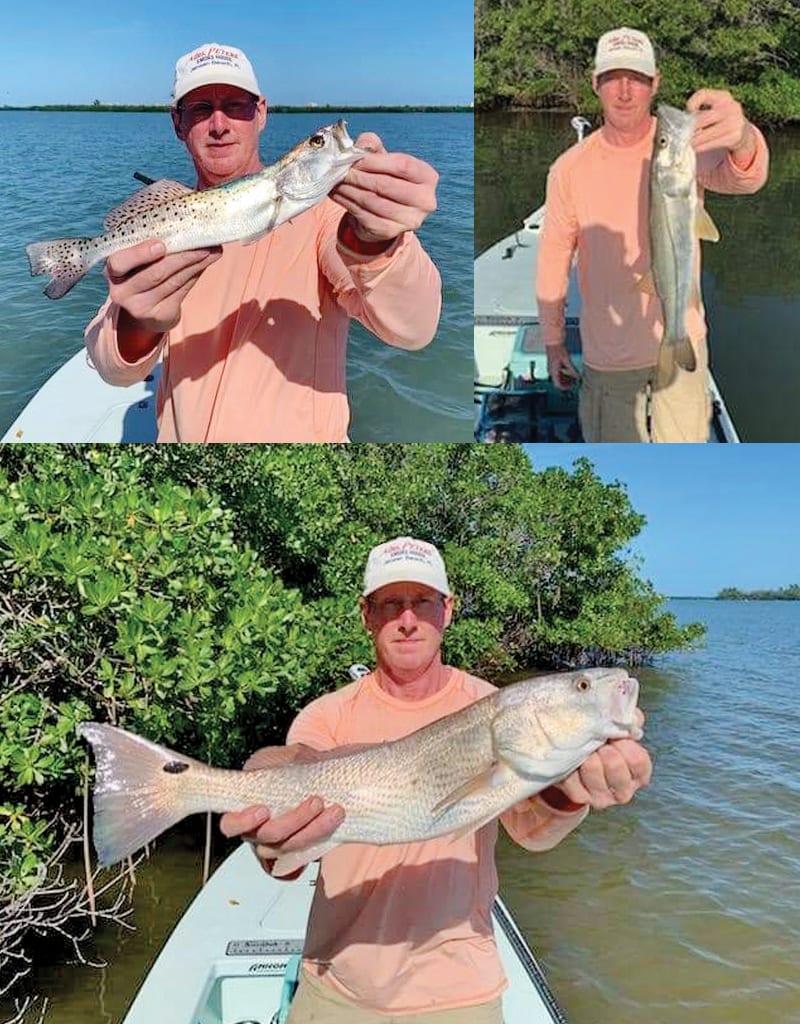 I had a lifelong friend visit last fall and the day produced something that isn’t very common on the Indian River Lagoon anymore—an Inshore Slam.

My wife, Margherita, and I moved here almost five years ago from Central Pennsylvania, a small blue collar region where I had lived my entire life. When you spend over 50 years in one place, you tend to know many others who call that place home as well. The same goes for friends. The very good ones are usually very close and you’ve forged a strong bond from spending all those years together. Therefore, when I received a phone call from Matt Byler, one of those close friends and he wanted to visit and fish saltwater for the very first time, of course I couldn’t invite him fast enough. I had informed Matt that with the water issues we are experiencing here, that the fishing isn’t what it has been in the past, but I would do everything I could to make it as memorable as possible.

I had loaded the skiff the evening before and we were on the Indian River Lagoon above Fort Pierce a little before day break. I had some mild success with the first light top water trout bite in the past, but today it was all fishing and no catching. I have never had good luck fishing the mid tide, and that is exactly what we had when we arrived. I had hopes of a turn around with the coming outgoing tide and headed to a flat where I had caught some nice redfish in the past. After a half hour run, we arrived just as the tide began to change. I poled up on one of the many discharge pipes that line the Lagoon and Matt’s first cast produced a viscous strike that is very common from a nice, healthy snook. Bringing the fish to hand, after a few pics the first fish of the day was released. Things were definitely looking up. A few minutes had passed when we poled up on a small point, where another discharge pipe had created a little current. Several casts in, another strong strike, but this fish reacted much different. I knew from the long, strong run and the way the fish mulled along the bottom, that he was hooked up on a nice, mature redfish. This may be Matt’s first saltwater adventure, but he has been an avid fisherman his entire life. He pressured the Big Red when the fish stalled and applied side pressure when it ran. The constant pressure did the job and within ten minutes the bull was lifted in the skiff, a few more pics, and released for another angler to pursue.

Now, the day was taking a direction that a few hours before, I would have never thought possible. We could possibly get Matt the Inshore Slam on his first day here! I informed him of my train of thought and suggested we run to a flat a few miles away that had some deep edges, typical holding water for trout this time of the year. He was up for it. As if there was some kind of Divine intervention, we weren’t to the location more than a few minutes when Matt hooked up to a leaping trout and the final species for the Slam. We continued to fish for another hour, and this spot produced not only a few more trout, but a small flounder that was just the icing on an already great day.

I couldn’t help but feel blessed to have been given the opportunity to watch someone’s dogged desire and hard work pay off and make memories that will last the rest of our lives. I’vehad some good days on the IRL since that day, but nothing that means as much as watching a grown man and friend forget about the everyday responsibilities of being an adult and just enjoy life and have fun.

It was a great day.