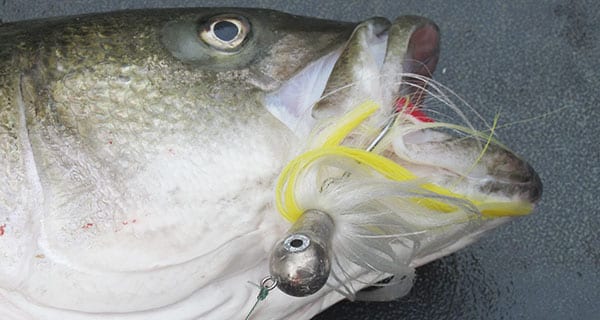 I know I’m not the first person to notice that we’re losing prime fishable time from our already foreshortened New England seasons. I also know, having discussed this apparent new trend of the last decade or so with numerous folks in seemingly every party of the larger fishing industry, that the underlying causes for this new challenge are numerous and complex.
Obviously, the last 15 years of regulatory wrangling have cost us many or most of our historical rod-and-reeling options—especially those early-season opportunities that helped foregoing generations of anglers justify a decision to dump the boat in three weeks on the frigid side of Memorial Day. Winter flounder landed on the off-limits list some years back with a regulation that closed Rhode Island’s various salt ponds and other estuaries up Narragansett Bay—in reality, all the remaining places that held enough spring flatfish to warrant so much as an attempt. So have those who target spring tautog in Narragansett Bay lost much of their traditional window of focused blackfishing. Some years, we’ve paid for a previous season’s summer flounder excesses with a very late opener that cost us most or all of May.

In at least as many cases, biological/ecological reality have put a serious dent in our early angling ambitions. Whereas we enjoyed solid spring codfishing through the 1980s—and had some good years thereafter—the April-May action south and east of Block Island has failed to materialize, even in the years we’ve had bang-up groundfishing straight through the winter.

While there’s little doubt the loss of these one-time spring fishing opportunities has contributed to the universal decline in spring effort, truth is, even when those were viable options for folks dying to get an early jump, only a small fraction of Ocean State recs ever really logged much time in those fisheries. Put another way, it wasn’t winter flounder that used to have local marinas starting a waiting list before June.

Although the decline in spring fishing has been clear for the better part of the last ten years, it has intensified at an alarming rate the last few seasons, to the extent that friends of mine in the marina, tackle, and party/charter-fishing businesses are getting scared for the future. The problem is that there’s no obvious problem to blame for the sharp decline in spring activity.

I hate to say it, lest various folks with whom I’ve argued loudly in recent years accuse me of somehow relishing in their misfortune, but I can’t shake the feeling that the lack of early-season fishing ambition/energy is a direct consequence of our striper situation, specifically the disruption, two years back, of the longstanding two-striper economy.

If I’ve learned one thing in my 20-year run in the fishery, it’s that in a community as small and as tight as RI’s sport-fishing world, nothing ever happens in a vacuum.

Through the regulatory process that culminated in the passage of measures that reduced the possession limit from two to a single striped bass, all kinds of animosity grew between “private” recreational anglers and so-called “for-hire” (i.e. party/charter) recreational fishermen. Where the final regulations made no distinction between the two groups, the truth is that the two user groups use the striper resource differently. None of the rhetorical specifics of the ongoing arguments matter to my point; I mention the rift between charter captains and private recs only because it has muddied the waters badly—made it difficult for either side to concede common ground with the other.

In reality, the loss of the second fish has wounded seriously a charter fleet that spent more than 15 years building repeat clientele and filling out seasonal bookings on a two-bass economy. Through dozens of other regulatory losses—the massive escalation of minimum sizes on fluke, the loss of school bluefin tuna or black sea bass, among endless others—the charter fleet kept sailing on striped bass. But every other regulatory loss ratcheted up pressure on the remaining 2@28” bass.

During that same span of years, the fishing media, and by extension the recreational fishing public, went trophy-striper crazy. By 2007 or so, it was becoming challenging for RI charterboats to fill in schedules for the early season—May and early June, or again late, October into November, with fast action on generally smaller migrating fish—when every fishing report or feature made it clear the big girls showed the last week of June, first of July.

Then, by 2012 or so, when, despite huge loads of 40- and 50-pounders coming from Block Island, the stock began to show stress cracks, the business started to pull back from the ends of the season.

In the heat of the debates, I chastised charter captains for creating their own nightmare, teaching clientele to define trip success in terms of “limiting out” on bass, and in the process turning each new group into the worst kind of meat mongers. To be fair, I had many of those same arguments in the cockpit, an uppity deckape grown a bit too big for his rubberized britches. For all my own public righteousness, I made all kinds of coin on striper hides—can’t remember a time then when I wept into the full fish boxes over the plight of stripers.

Now, the marinas are still gap-toothed (at best) in early June—a sea of open slips right on the threshold of high tourist season. And the charter docks are packed to capacity weekdays, May through late June—the loss of that second all-important striper just enough to get too many clients standing by for slob time. “If it’s only going to be one fish,” goes their logic, “that one’s gonna weight 35 pounds…”

What no one anticipated in all of this is the impact on the larger fishing community of all these charter boats chafing the pilings—all the May and June trips they’re not making. I’m only now beginning to see it, and I observed the comings and goings of those boats on a full-time professional basis for almost two decades.

The grim reality is that, since the end of the Moratorium, it has always been the charterboats grinding away, command performance after command performance in windy, raw May conditions that set the whole striper-obsessed world in motion again after each brutal winter. It was the party and charter boats, bigger and more seaworthy, who put in the early weather, who found (or confirmed the arrival of) the first shots of early stripers in the Rip or off the SW Corner or down the beach. More to the point, it was the full-timers who not only returned to port with the first loads of good fish, but understood the need to get that word out to the public.

Especially now, in an era when the fishery’s young bucks are trying to make trade secrets out of common knowledge, the fish still keep the old migratory schedules. Still, we need to hear it before we’ll roll the dice.