During the more extreme weather times of the year, the heat of summer and the dead of winter, many of the most popular fish bites slow down or see the fish have moved to unreachable areas altogether.

True survivors, Bowfin have been around for more than 100 million years

However, year-round, bowfin offer a sporting quarry the unaccustomed are often not prepared for. Whether you call them mudfish, bowfin, or dogfish, these fish are reminiscent of river monsters. True survivors, bowfin have been around for more than 100million years. Kayak fishing for bowfin offers some particular challenges; bowfin are not a happily netted or boated fish. I’ve had great success using fish grips on the fish while still in the water. Bowfin are also slimy, so be prepared to deal with the likes of an 8-pound toothy eel in your kayak.

Where to Find Them

Locally, bowfin can be found in Goose Creek Reservoir, WeeTee WMA, Lake Moultrie, Sparkleberry Swamp, the Santee River system, among many other oxbow lakes and sloughs. My best success has been to find slow-moving current and fish in water 6-9ft deep in or near an open channel. Be sure to fish with the current and when you find one bowfin, you’re sure to find more.

I use 2 primary setups when fishing for bowfin—one spinning and one casting. The spinning setup I’ll primarily use for fishing bait. I’ll pair a medium weight/action rod with a 2500 class spinning reel and spool it with 15-20# braid, topped with a 3-foot leader of 20lb mono or whatever bait setup I may be using. For my casting setup, I’ll use a medium-heavy rod with a fast action for finessing jigs and other artificials. My line is a castable flourcarbon in 15lb test, which offers a controlled stretch and solid hook setting ability. 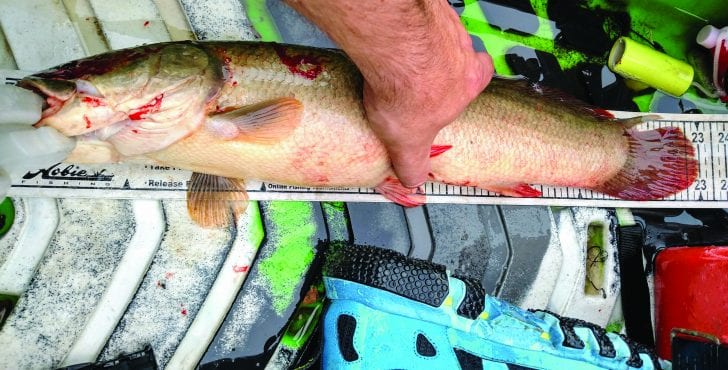 Go-to baits for bowfin include many similar baits used for catfishing. Fillets of bream, finger mullet, shiners or mud-minnows will all catch mudfish during the cooler months. Rigged to be fished on the bottom with either a Carolina rig (if you trust the bottom and your gear), or a Santee Rig if you plan on drifting or dragging your bait. Bowfin typically sit on or near the bottom in slow current, so a catfish-style rig works well to get slow fish to bite and cover a decent amount of water

In the winter, bowfin slow down just like many other fish. With water temperatures into the 50s, a slow presentation is called for—so the use of a sensitive rod is imperative. A stand-up jighead with a scented plastic is a great option, using more natural colors the clearer the water is. Chatterbaits and spinnerbaits, worked much slower than in summer, are also tried and true bowfin lures. Work slow and use sensitive gear and you’ll entice a bite!

The standing IFGA all-tackle world record bowfin was caught in South Carolina in 1980, weighing in at more than 21 pounds! The current catch/release record is 37” from NY state, however reports of 30” to 36” bowfin in local waters mean there’s a chance a Coastal Angler reader could topple that locally.