“That’s why they call it fishin’, not catchin” my dad used to say when we failed to get the sought-after weakfish or flukes in the channel between Shelter Island and Greenport, NY. He’d make the best of it, take his meager haul of porgies and try to persuade someone at the house to cook them for him. “Too bony,” my grandmother would say.

Well it was déjà vu all over again at the Helme house last weekend. We had stacked the deck for a great day of fishing: matched the hatch, plotted the tides and even called in our own ringer, Tom Schlichter. Known on Long Island as Outdoor Tom, he is a man with a reputation for always getting his fish. We were sure we had it made.

Tom, Mike, Felicia (Tom’s wonderful wife) and I headed out of West Neck Creek into a beautiful Shelter Island morning. We were angling for a fluke or weakfish to catch for the cover of this Magazine, and then have it serve double duty as dinner and the subject of our Sea-to-Table Column.

I wish I could regale you with expertise and anecdotes that led to mission accomplished, but despite stacking the deck as best we could, the money fish were nowhere to be found. The biggest excitement of the morning was a sand shark that we thought was a weakfish by the way it circled and fought. But no such luck. “You know, they use those fish in fish and chips in England,” Tom said hopefully. I tried to visualize myself fileting and eating that sand shark and just couldn’t. Back into the water he went, his lucky day. 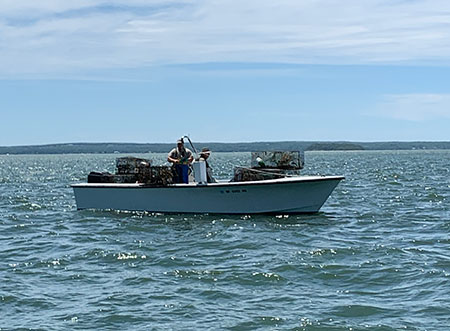 “Now it’s personal,” Tom said after we threw back the sand shark. He refreshed his bait, swished his rod with the skill of swordsman executing a perfect thrust, and willed the fish to bite. He was not returning to shore without the fish for the story.

In the end, the best we could produce was about a dozen porgies, 7 regulation size and a few sea robins. Again, I wish I could tell you that we cooked them up in a way to rival Mike Wade (Watchhill Outfitters) recipes, with a recipe a restaurant would be proud to charge $25 a plate for – after code-naming them silver snapper or panfish of course – but that’s another story.

Even Mike’s promising marinade and perfectly executed stint on the grill only produced mediocre results. Of the 7 folks at the table, 5 tried the porgies in the fish tacos and we only got 2 ‘ata-boys. My brother spent “most of his time coughing up bones” according to his daughter, Sandra, and vowed never to eat porgy again.

But it was a great day on the water with wonderful friends off of beautiful Shelter Island, fishing the waters I used to fish with my dad. It was fine and memorable for all of the right reasons.

By the way, it was Felicia Schlichter who caught the biggest fish, outgunning her talented husband. We heard this wasn’t the first time that ever happened.