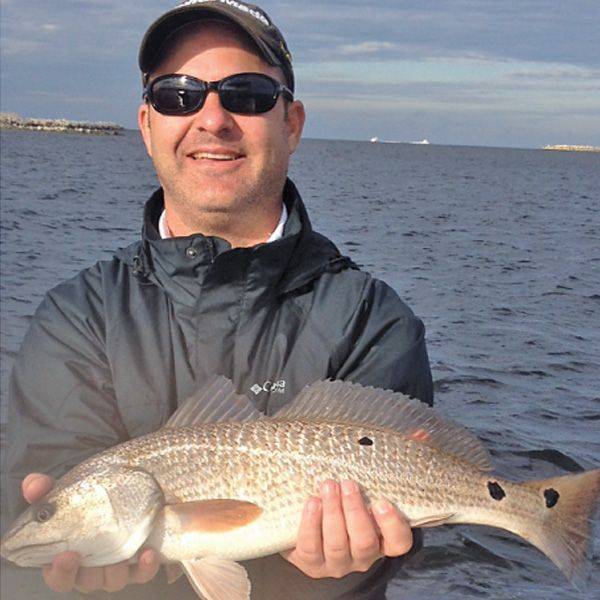 BAYS & BACKCOUNTRY FISHING– Well, December is here, and after a few decent cold spells in November, the fish have begun to converge on their favorite winter hideouts. The Speckled trout are schooling around the mouths of the bayous, canals, creeks, and rivers preparing for the winter haul in the backwaters. Use so plastic curly tail jigs with bright colors or the Berkley Gulp Shrimp and DOA’s in the new penny or pearl patterns and colors to get them to bite. Obviously, live bait will work great too, but if shrimp is your choice, be prepared to feed a few Pin fish.  The redfish will be doing much the same, but if you can find a calm day, get out on the shallow muddy grass flats when the sun is high and you can still sight fish for those reds lying on the bottom in 1 to 2 of water. Stealth is a top priority, and they will hit many of the same lures that the trout will hit. But the reds will also eat a spoon. The bay has plenty of big Blue fish and Spanish mackerel too. The flounders are being gigged and caught in the deeper holes in the bay and right up on the beach on the gulf side as they’re getting ready to head offshore. There have been reports of people gigging flounder on the beach in knee deep water with a head lamp and a gig, and going home with a limit in an hour. In the deeper water of the bays, there are some good limits of Mangrove or Gray snapper (locally called a Black snapper, but there is a difference, so check FWC regulations) especially on cold calm nights around the full moon. Live shrimp fished on the bottom around the bridges and jetties will do the trick. Sharks are also plentiful and will always liven up a slow trip. For those that can stand the cold water, stone crabbing is always good in St. Andrews Bay and will be open all month.

OFFSHORE FISHING–  The last day for Gag grouper is December 3rd, so get them while you can. You can still keep Black grouper (22″), Red grouper (20″), and scamp (16″). A report from Capt. “Bobo” Hobbs of the Florida Queen is that the offshore bite has and will continue to be good. There have also been some really nice amberjack caught lately. The Trigger fish are covering up the wrecks offshore, but you can only keep two, and they have to be 14 inches at the fork.

With December here, most of the weekend warriors have put there poles away and picked up their bows and rifles and headed for the woods for hunting season. I love hunting as much as the next guy, but any true angler knows that this is also the time of year when you can have the water all to yourself, and it is as clear and beautiful as it gets. So grab your gear and get after it!