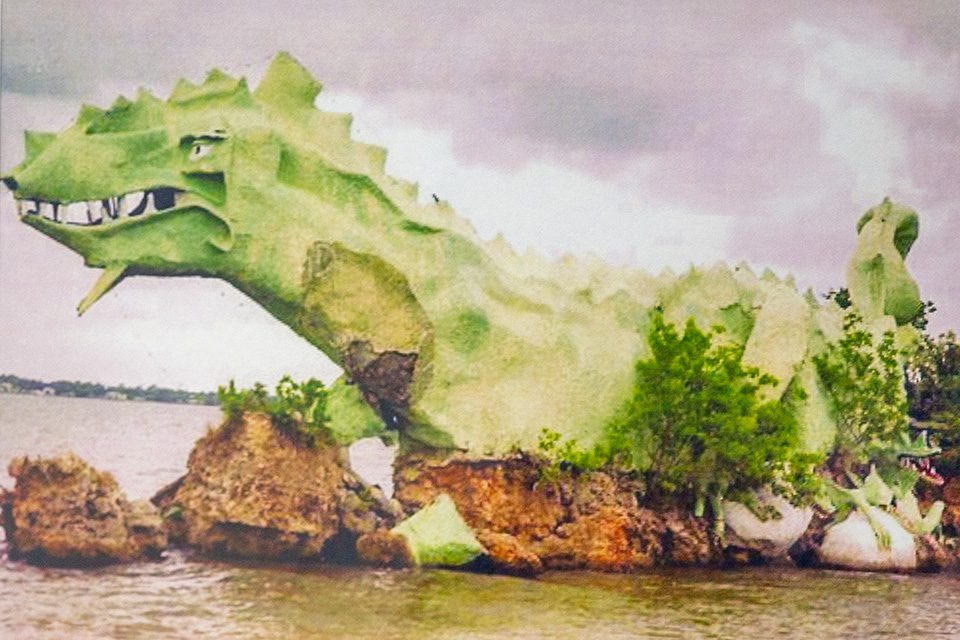 Sculptor Louis VanDercar built “Annie”, a concrete dragon that stood guard over the Indian & Banana River lagoon on the southern most tip of Merritt Island, Florida. Twenty tons of concrete and steel were brought in to ‘Dragon Point’ by wheelbarrow, as the only access was a wooden boardwalk.

The skeleton was created with steel rods and sheets of steel, and then covered with concrete to create the 65 foot long, 35 foot high dragon statue. VanDercar was an ingenious sculptor. With skillful imagination, he created the dragon with a hollow belly, complete with tables, chairs, and electricity.

Hieroglyphics were painted on the inside of Annie’s belly but unfortunately, these ancient Egyptian symbols were ruined by vandals.Stairs climbed up the dragon’s neck, and children looking out the eyes could see the sun rise on one side, and set on the other.

On the fourth of July, smoke billowed from her mouth. Charity events and birthday parties were common by the dragon. Children and adults alike remember Annie as a true Space Coast landmark, and a site for visitors not to miss.

It is said at one time fishermen caught red fish up to 30 pounds off Dragon Point, and boaters from as far away as New England used Dragon Point as a meeting place. Erosion, salt spray, and hurricanes finally took their toll on the dragon statue and in August of 2002, Annie collapsed in the Indian and Banana river lagoon. Annie was purchased by a new owner in 2015 , that is looking to restore her back to her former self.