It is that time of year when local anglers and visitors gear up and prepare to target winter Sheepshead. What makes December, January and February prime months to target large Sheepshead?

It’s not because large Sheepshead have not been around through the spring, summer and fall months.

It is because during those warmer months, the Sheepshead have a lot of competition feeding on the same diet as them, like Pinfish, Spot, Porgy, Pig Fish, Puffer Fish, Spade Fish, etc.

These smaller species of scavengers and crustacean feeders are aggressive and move around faster than most Sheepshead.

They are intending to reach the bait on your hook before large Sheepshead can get to it themselves, making it difficult during the warmer months to land large Sheepshead.

A lot of anglers will find themselves landing a lot of small Sheepshead between 5 in. and 16 in.

This is because Sheepshead within this range are younger and inexperienced and will take advantage of what food is available that seems to be on their diet.

For those anglers that are not familiar with a Sheepshead’s life cycle may be surprised to learn that a 23 in. Sheepshead is about 20 years old—in some cases, older. 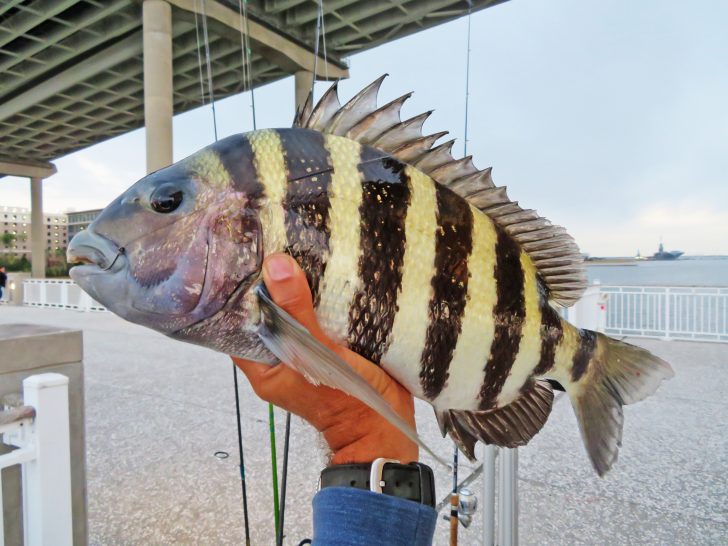 This is how long it takes for these fish to reach weights between 8 lbs. and 16 lbs., depending on their food source.

It is why it becomes important to release a decent amount of large Sheepshead caught so that these old adults can breed a healthy, strong gene pool of offspring that will become their next generation.

So, why does it become easier to target these larger fish in the winter? It is because of those scavengers and crustacean feeders I mentioned above move out to sea in the winter.

They are giving the Sheepshead a reprieve during our winter months. This allows anglers to use different baits than what we have been using in the summer.

So now we do not have all those little critters stealing it off of our hooks as bad.

It becomes important to release a decent amount of large Sheepshead so that these old adults can breed a healthy, strong gene pool of offspring that will become their next generation..

Just remember that shellfish out of the shell is soft and runny and can be difficult to lace on a hook, if one is not experienced.

If there are still some small predators hanging around stealing the soft bait from your hook, an angler can still use small pieces of pantyhose or purchase fine netting or even small bait bags used for Catfish to put the soft bait in and then push the hook through the material.

This will allow the soft bait to stay on the hook longer and make it harder for the smaller fish still around to steal the bait off of the hook.

A large fish will grab the whole thing in most cases and allow you the opportunity to go for a hook set when those black and white ninja-like fish take a bite.

That’s right, ninja-like fish because in most cases, you will never know they were there.

That’s what makes fishing for large Sheepshead so much fun. Like I have said before, it becomes a competition between you and the fish.

You may also enjoy reading Thought You Knew Everything About Your Fishing Rods? (Think Again)