Of all the eye candy at this years iCast, the Skanu from East Cape Skiffs was where I left my drool puddle.

East Cape, based out of Orlando, is a leader in building custom skiffs and the Skanu benefits from their years of skill.

Hybrid would be the only way I can describe it: you can kayak paddle, SUP paddle, push pole, motor (up to 3hp), or grab the trolling motor off your big boat (she’s can be prewired).

On the drive down to Florida I was intrigued by the idea and its design but kept thinking, “when would I ever use that?”

Once I saw it in person I kept thinking “Where couldn’t I use the Skanu?

I daydreamed of “leaving the office early days” for a quick solo Redfish mission, sliding into that side of the road spot, or terrorizing the neighborhood bass pond with the kids.

I won’t even get into what you could do with the Skanu in the Everglades!

They left the show atop a small SUV and could find a home aboard bigger bay boats: think “Mothership”

At 85 lbs, the Skanu is fairly portable- they left the show atop a small SUV and could find a home aboard bigger bay boats: think “Mothership.”

If you live on water, a small kayak dolly or a good back is all thats needed to launch.

The layout and finish is what you’d expect from East Cape. Raised rod holders keep the floor clear and everything ready for action.

The bow can be prewired for not only a trolling motor, but can also accept GPS/Depthfinder units to be mounted flush- again keeping everything clean and fishable.

You can ad the micro power pole easily but the bow has a hole to secure a “Stick it” style anchor.

The poling stakes, like those found on flats boats allow it to easily track straight while being paddled or poled.

The little boat won best boat/watercraft at iCast, so I’m definitely not alone.  The Skanu is rated for two people that’s about 500 lbs and is 12’6” of sneakiness.

Come check one out at the shop, we’ll clean your drool. 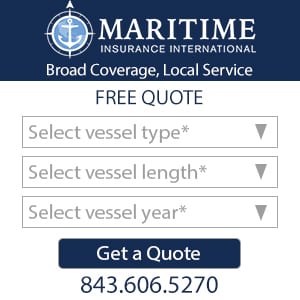