Why crappie fishing? With all of the other species out there why fish for crappie? Bass may provide a thrilling fight on the line, catfish are the illusive giants of the lake and bream are an easy catch on a hot summer day, but crappie fall somewhere in the middle of all of this.

They can be illusive or abundant, lazy or aggressive, shallow or deep. Fact is they always make it an exciting puzzle to catch them.

South Carolina crappie fishing heats up with the temps this time of year and we are surrounded by some of the best waters in the state. Perhaps the fish that put the “pan” in pan fish, crappie are one of the most sought after species for the table.

We have both the black and white sub species found throughout the state. Spring crappies generally stage on woody cover in shallower water near deeper water.

Crappies have favorite spots and will return to them year after year… so make sure to note where, when, and what you caught the fish on, it could be a recipe for success for years to come. 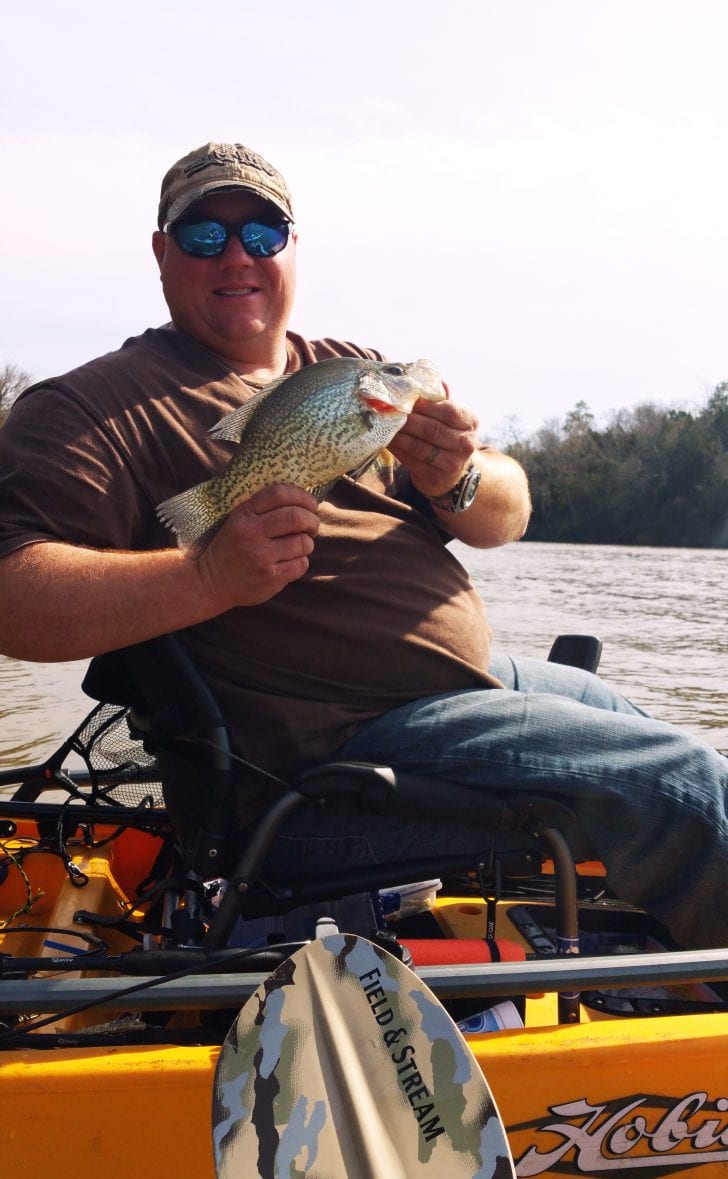 Following the spawn, they move to deeper more open water where they again suspend near structure. The darker the water the more likely they are to favor the structure location.

Woody cover is the favored staging spot for crappie and the pre and post spawn periods are prime times to find them on the brush.

Fishing deep brush is highly predictable and even during the spawn will produce fish because not all crappies move at the same time to or from the shallows during the course of the spawning season…, which can run into summer in some lakes and rivers.

To clarify deep is a relative term.  It can mean water that is 10 feet deep on one lake or 25+ feet on another, depending on water clarity, spring rains or other factors. Simple experimentation will provide the answer.

Finding brush with crappie is job number one. Modern equipment such as down/side scan imaging sonar makes the process simple.
Woody cover cannot only be found but fish can be marked and the depths they are holding at can be noted.

Depending on the season and therefore their location crappie will dine on all sorts of local forage. Most of their diet consists of zoo plankton, aquatic insects and juvenile fish… so small baits are the ticket.

One of the best techniques is simple fishing small jigs vertically over deep brush. Long rods with fast action tips paired with an ultra-light reel are my favorite combination. The rod should have a fast tip for “feel” and plenty of backbone to muscle slabs out of heavy cover.

When you catch a crappie note the exact depth and repeat the presentation. 6lb test line is a good starting point for crappie, I go as light as possible and often use 4lb test. Many crappie pros use high visibility line for a reason, they want to see it.

Crappie bites can be ultra-subtle, and sometime just a little “tick” of line movement will be the only clue to a bite. A quick snap of the wrist will load that slab on the hook!

Jig size is crucial, heavier jigs (1/8 or 1/16) will provide more feel and may produce-but don’t leave a potential crappie brush until you have dropped a 1/32 or even a 1/64 ounce jig. 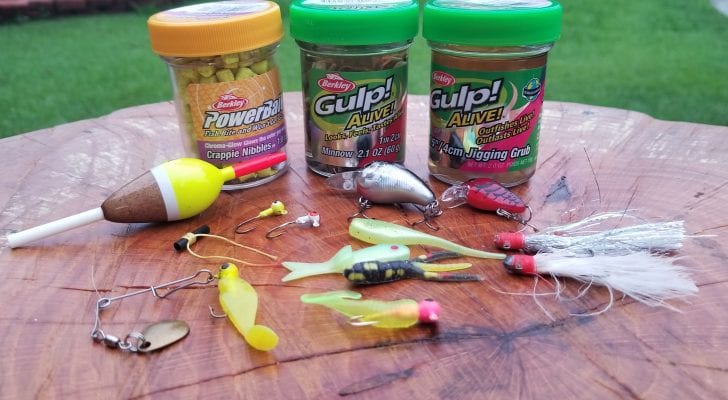 Strangely enough the size of crappie caught is often inversely proportional to the size of the jig.

If jigs are not working-no crappie ever resisted a live minnow. Also, try tipping jigs with minnows or Crappie Nibbles.

One of my favorite baits are Gulp Alive Shiners. Lower your jig until it bumps the brush, then raise and lower your rod tip as you swim the jig around the cover.

If crappies are home they usually bite quickly. I find that low light periods are often best for active fish but not always.

On clear summer days you might have to probe the cover extensively to find the fish.

Crappie are consistently found on the same spots year after year

The old adage, “if you are not hanging up-you are not fishing good crappie cover” is often true. These fish hang very tight to cover in deep and shallow water.
Now where are those brush piles? Crappie fisherman are among the most tight lipped anglers there are and for good reason.

Crappie are consistently found on the same spots year after year. Lakes Marion and Moultrie hold great numbers of both black and white crappie.
Don’t overlook the rivers either, the Tail Race Canal/Cooper River and the upper Ashley offer some fine crappie action as well. According to Ross Self, Chief of

Fisheries for SCDNR “Crappie population state wide looks healthy, and barring any unusual weather situations, the 2018 crappie fishing forecast is promising.” Go light, get in the yak, find cover and find the fish!

Crappie fishing can become highly addictive due to the minimal cost, effort it takes to find the fish and the tasty reward on the dinner table.
Hopefully this is enough to get you on the water and on the prowl for a crappie or two.

After crappie fishing for a while, you will pick up on their tendencies and be able to more quickly pinpoint their locations and haul them in.

Crappie also happen to be the July’s target species for the Lowcountry Kayak Anglers, remember to photo your big ones and send them!