D.O.A. has been a popular manufacturer of artificial baits for some time now, and one of its most popular saltwater artificials is its Shrimp.

These Shrimp come in all kinds of colors and patterns. They are popular used under popping corks.

Free line with just the Shrimp itself, or even thrown into deeper water with small trolling weights.

The 3-inch being the most common size used only comes in ¼ ounce. You will find that the artificial Shrimp has a black-ridged weight inserted in a slot located in the belly of the Shrimp.

The hooks are chrome and are placed in a pre-grooved location from the nose of the Shrimp with the barb exiting just where the tail and the main body meet. 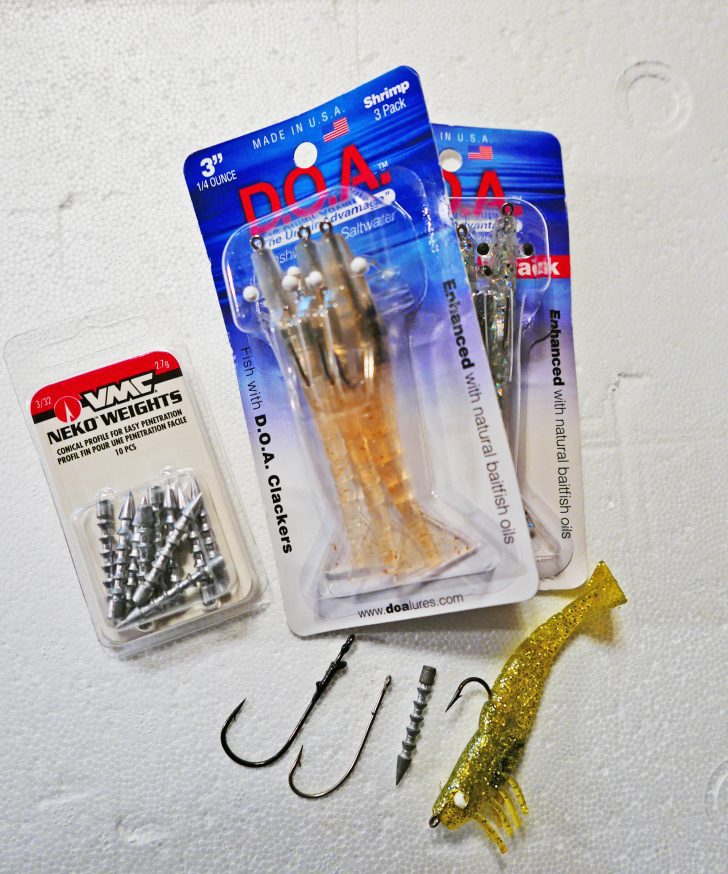 D.O.A.’s 4-inch Shrimp is rigged the exact same way, except the weight located in the belly of the Shrimp is heavier, bringing its 4-inch Shrimp to the ½ ounce category, and the hook is slightly larger.

While using these Shrimp, most experienced anglers have noticed that the ¼ ounce Shrimp sinks slowly and is almost always lying on its side in the water.

After a few casts, or especially landing a few fish, they will notice that the hook pulls forward from the Shrimp, and the body of the Shrimp slides back down the hook, curling the Shrimp into a “u.”

Then we find ourselves trying to push the hook back into the Shrimp and casting again, only to find the problem repeating itself over and over.

The D.O.A. 3-inch Shrimp is a fantastic bait and could work even better if we could bring it to at least ½ ounce in weight.

Place the hook where it will stop backing out of the Shrimp, and position the weight where the Shrimp will not fall sideways.

Instead, make it more of a nose drop to reach fish in the deeper holes and maintain its depths in higher winds and swifter currents.

So, what I have done years ago is what I call, “The D.O.A. Shrimp Makeover.”

You start by removing the chrome hook from the Shrimp. After doing so, you will notice at the nose of the Shrimp the entrance hole where you removed the hook from.

You will then take the hook and place it in the nose of the Shrimp just above the entrance hole (see Photo A).

Start to lace the hook down through the Shrimp in the hard plastic and exiting the barb out of the exit hole at the top of the Shrimp (see Photo B).

This will ensure a strong, firm placement of the hook and allow the two keeper barbs to fasten the hook securely in the plastic.

You then take weights, usually referred to as nail weights, and you can obtain these in different sizes.

One popular brand that I use is VMC Neko Weights, size 3/32 or 2.7g. Place the weight into the hole in the nose of the Shrimp you removed the hook from (see Photo C).

Push the weight all the way into the Shrimp. The weight will rest between the black belly weight and hook (see Photo D).

This will greatly increase the action of the Shrimp, allow for farther casts.

The Shrimp will make more of a nosedive and stay upright in its action, allowing you to work faster water, reaching depths quicker, and above all, more options with the Shrimp’s presentation.

A fleeing Shrimp means that the artificial Shrimp is pulled in the direction from the tip of the tail instead of by the nose.

You can accomplish this with D.O.A. easily by removing the hook the same way described above, except for this time, you are going to take the hook and lace it starting from the tip of the tail, come through the tail and exit out at the top of the Shrimp (see Photo E).

You can still add a Neko weight or nail weight through the front nose if you want to.

This will increase the casting distance tremendously with the fleeing Shrimp because the Shrimp will act like a dart rigged in this fashion.

The second other way is wacky style. That’s right! Just like a rubber worm using a wacky hook or wide-gap circle hook.

This style is perfect for popping corks. Instead of the Shrimp hanging by its nose with its tail straight down, the Shrimp hangs level from the top of the body.

The process is simple. Remove the hook from the body, then take the wacky hook and place it through the side of the Shrimp in the center just above the belly weight (see Photo F).

I hope this helps with your next fishing adventure, fishing with D.O.A. Shrimp.

I hope this helps you catch and land some nice winter Trout. Like I always say, until next time, good luck out there and have fun fishing!