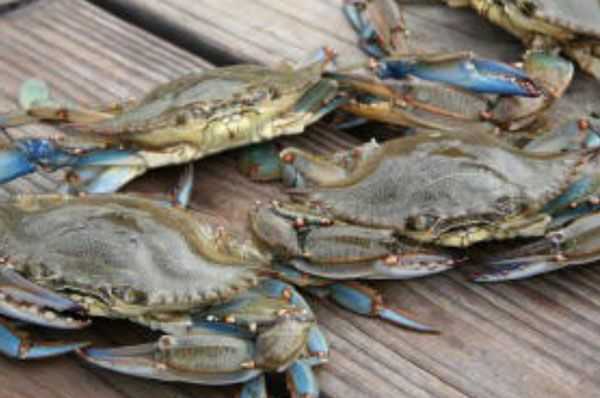 Starting with the first full moon in May, adult blue crabs start crawling out of their winter mud holes to molt making them prime prey for birds and fish, as well as the rest of us and the crabbers who scoop them up for sale to restaurants.

While the blue crab’s body is an olive green, it gets its name from its claws, which are sapphire blue when raw. The female’s claws are tipped in red and when either are cooked, the hard-shell crab turns red, similar to lobster. Growing up on Shelter Island, off the end of Long Island, we caught them all summer in the creeks and off our dock. My father used to love to set them loose in the bottom of his Dory, causing me to scream, and then set them loose, one by one, in the kitchen. He would wait with a grin on his face until my grandmother and the cooks would start to scream and run around the kitchen. “George! You come and get these things right now” my otherwise gentile grandmother would holler. It was a scene that played out many times each summer, and it never lost its thrill for my father.

For Rhode Island residents, no crabbing license is necessary. Just the night hours are off-limits. And make sure your beauties are five inches from point to point. Young crabs molt every few weeks, but the adult male blue crab sheds its shell only once yearly during the summer months. This makes it a prized special on menus through the Ocean State in May and June. And while it’s not illegal to harvest a female crab (sooks or sallies), it is more difficult to catch her during the molting phase, when they mate and the male attaches itself over her. Called “doublers,” these two-for-one crabs get stuck in crab pots and traps. Once the female is carrying roe, however, she is protected from harvesting in most states. If using dredges, nets or hand lines in Rhode Island waters, there is no daily limit on quantity. If using crab pots, no more than 25 adult crabs per person per day can be harvested, but that’s still a lot of good eatin’ for family and friends!

For a simple but delicious home prep, just boil a few inches of water seasoned with a tablespoon of white vinegar and a packet of Old Bay season- ing mix, available at any supermarket. Add live crabs and cover to steam for about 20 minutes. Remove to an ice bath or cold water to cool. When ready to eat, pull off the claws, flip the crab over onto its belly to strip off the shell as well as the brown spongy material (its gills) not to be mistaken with the yellow substance inside the crab, which is an organ for filtering impurities from the crab’s blood. Called mustard, the organ is edible and some like its distinctive taste.

The meat of the claws, on the other hand, can be pulled out in one strip. Just whack the claw with a hammer and a nice chunk of meat should be easy to pull out of the shell. Dip in lemon butter–yum!

For a really special soft-shelled crab, we went to an expert, Chef Mat- thew of Gracie’s in Rhode Island. Lightly breaded and fried and served with Hollandaise sauce, the crab was tender and buttery. Accompanied by green and white asparagus spears and potatoes in a pesto sauce, the dish was served as an appetizer but easily could have been a satisfying meal.

A delicious Sancerre or Sauvignon Blanc makes a wonderful accompaniment. Add your own pesto or Hollandaise for a gourmet touch or serve as-is with this garlic and white wine butter sauce:

Directions:
Season flour with salt and pepper and dredge crabs, shaking off excess. Heat a large skillet on medium high and add oil. When hot, add crabs and brown on one side about 2 minutes. Flip and brown for another 2 minutes. Remove the crabs and set aside. Turn down heat and add the garlic. Saute until light golden brown but not dark. Deglaze the pan with white wine and add lemon juice. Simmer until reduced by about 1/2, one to two minutes, and swirl in the butter to thicken. Sauce crabs immediately and serve with spring vegetables. Optional Hollandaise or pesto may be served as additional dipping sauces.