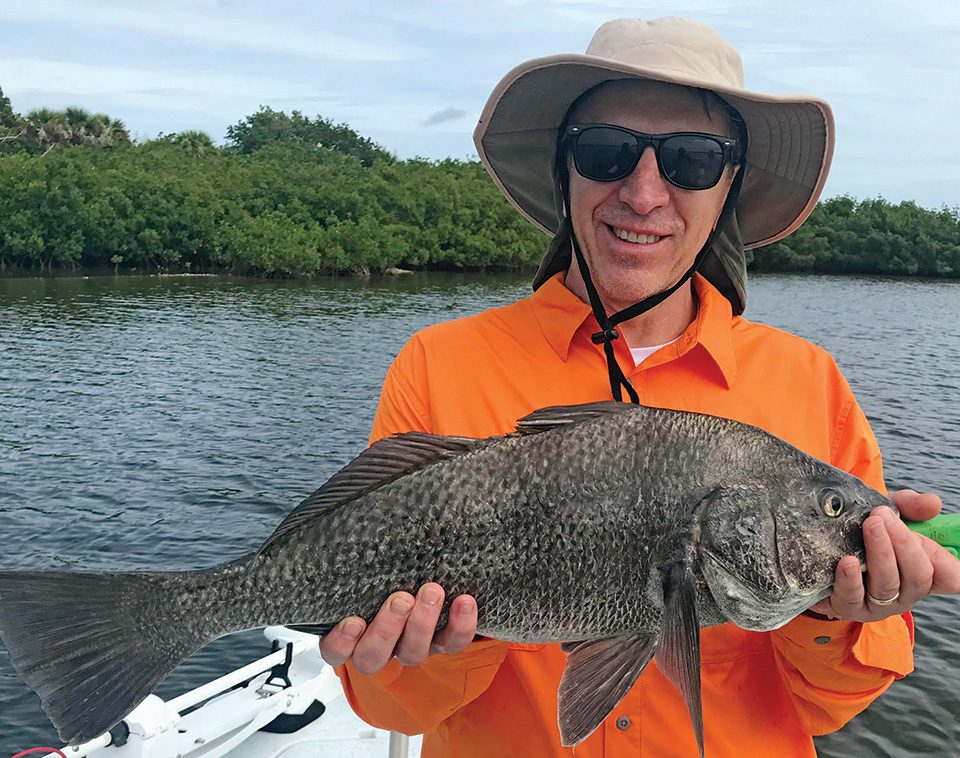 The heat of July has a big influence on fishing in the Edgewater Backcountry and Mosquito Lagoon. Most people will fish early morning, late afternoon, or at night. Start your morning fishing trips as early as possible to take advantage of the sunrise feeding pattern.

Cloudy water is the usual for the summer months, so use baits a fish can find. Smell, sound and vibrations in the water are keys.Smell can be achieved with bait such as shrimp, cut bait or scented soft plastics like Gulp; sound made by topwater lures with rattles or poppers, and baitfish like croakers and pigfish, vibrations from live finger mullet, mud minnows, and lures like spoons. One of the best live baits right now are the tiny “mini mullet” which are widespread in the backcountry, lagoon and ICW during early summer. They hatched here locally in early spring, and now they’re just big enough to stay put in a cast net, usually hugging close to sandbars and shorelines. Fish them free lined and tail hooked in shallow water, or lip hooked with a small weight on the bottom of deeper holes and channels during summer heat. The small mullet are also great summer flats bait to freeline near shallow flats edges, oyster and shell bars.

Another option to fight the heat is to fish shade as some fish do take advantage of man-made structures during middle day sunshine, under bridges, docks, and boats, plenty to pick from as there are uncountable docks and moored boats in coastal Volusia County. Main rule on these is to pick older structures and moorings. Old dock pilings are covered with barnacles and plant growth, in turn, attracting bait fish; seldom used docks are also a plus to hold better game fish, and docks with larger boats in residence usually have a deep hole to accommodate the boat. Fish sinking lures, shrimp and live bait fish close to and under the docks. You will have to deal with snags around the structures, but it comes with the territory. Longtime moored or docked boats are great FAD’s (Fish Attracting Device); structured oriented fish will be caught in close and under, including mangrove snapper, redfish, snook and trout. Open water game fish like jacks and ladyfish can be close by, attracted by the shady spot and baitfish. Many docks also have a bonus of nearby old standing pilings, oyster bars, grass beds and channel drop offs.

One of the best choices for summer night fishing are dock lights and bridges. Schools of bait fish and sometimes shrimp are attracted to the light and structure which, in turn, bring in the trout, snook, redfish, jacks, ladyfish, and snapper to name a few. Match the hatch of which type of bait you are seeing, use a small size lure, swim bait, jig, twitch bait, or soft plastic shrimp for most species. For the most strikes, a free lined live shrimp can be the go-to bait. Anchor just uptide and a cast out from the light, throw your bait upcurrent from the circle of light on the water and allow it to “swim” naturally through the target area. Outgoing tide can be best, but a moving tide in either direction is a must for a good bite.