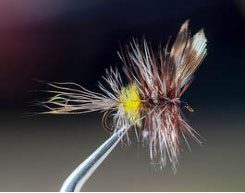 The Adams dry fly is by far the single most well-known fly, by name, by both fly fishers and non-fly fishers. It’s alphabetically near the top of every list anywhere among fly shops, so the fly gets attention. Besides being well-known, the Adams fly pattern in general has a strong reputation for catching trout everywhere. The exclusive upright and divided grizzly hackle tips, as wings, in conjunction with a brown and grizzly mixed hackle, bears the Adams label, regardless of other characteristics and features.

The Female Adams (believed to have originated locally), Adams Variant, which was originated by Allene Hall of Bryson City, North Carolina (Fred Hall’s wife), Yellow Parachute Adams, Black Adams and Smoky Adams are each a fly pattern unique to the Southern Appalachians. The very popular Adams Variant is a local fly pattern that was developed by Allene Hall. It was tied and sold by the late Bryson City resident, Fred, and his wife Allene Hall. This is one of their trademark dry flies that made them fly tying legends here in the South. Fred Hall is credited for originating the Black Adams and the Smoky Mountain Adams.

The Adams Variant is fished much like a Wulff pattern. The rear grizzly hackle adds float capabilities that hold up well in rough water. The Adams Variant is our personal “go to fly” on delayed harvest waters where the ripples and runs contain rising rainbow or brown trout.

You will not find this timeless, local fly pattern in most fly shops as it is not as well-known as the Adams, but nonetheless, it is highly effective as a go-to rough water fly pattern. You may well find the fly available and sold locally in tackle shops, service stations, and general stores throughout the North Carolina Mountains where a local tyer is making part of his living tying and selling his flies. For example, the Citco along NC 19 in-route to the Nantahala River has a display of locally tied flies that includes (before the sell out each month) the Adams Variant, tied typically in size 12 and maybe size 14. You will have to tie your own size 16 and size 18.

1. Begin thread wraps two or three eye lengths back from the eye and wrap tightly about one third of the length. Let the bobbin hang.

2. Select two equal size grizzly hackle tips. Generally speaking, the excellent dry fly hackle we use has terrible tips for use as a wing. Spade or saddle hackle is much broader for the wing profile. The tips should be about the length of the hook shank. Strip a short section and tie in together with the “cupped” sides facing away from each other. Secure the tips, facing the hook eye with several wraps on top of the hook shank. Advance the thread to in front of the tips and pull upright by tensioning the thread in a parallel to the shank pull. Once they stand up, add several turns in front and behind to secure their place. Divide the wings using several ‘x’ wraps and take the thread in touching wraps to above the hook barb. Let the bobbin hang.

3. Select a small bunch of natural deer body hair and clean the underfur thoroughly. Stack and tie in on top of the hook shank with the length being about the same as the hook shank. When tying in, use several light wraps for position. The deer should start at the wing and then extend beyond. This will make a smoother body without big lumps of varying materials. Once the position and length are good, tie in firmly, starting at the wings and moving to above the hook barb (you may need to pinch the hair on top of the hook shank by using your left hand to keep it from rolling at first) and let the bobbin hang.

4. There is a short section of hackle immediately in front of the tail. Choose a size, or even two, smaller than “normal” for this section. When it is wrapped, it should be smaller and not extend past the hook. You only need two or three wraps. Tie in, trim the waste, and let the bobbin hang.

5. Select a piece of yellow ostrich herl with barbs not exceeding the hook when wrapped and tie in immediately in front of the grizzly. Advance the thread to the wings. Wrap the ostrich in touching turns to the thorax, tie off and trim the excess. Let the bobbin hang.

6. Select a brown and a grizzly rooster that are matching, not only in the length of the barbs but also in the diameter of the stems. Strip their tips and tie in behind the wings. Advance the thread to in front of the wings and let the bobbin hang. Advance the brown hackle leaving space in-between turns for the grizzly. Tie in the brown in front of the wings leaving room for the eye. Trim the excess and repeat with grizzly. After trimming the grizzly form, a nice head with thread, trim and apply head cement.