[dropcap]M[/dropcap]arch is the beginning of the spring season in the Sebastian area. The new season brings an expanded list of available species. Winters species such as pompano and bluefish slowly trickle away while the warm water species such as snook and tarpon take up residence. With this many types of fish and fishing available, it’s no wonder why the Sebastian area is a popular springtime destination for fishermen and families. Serious anglers can target trophy size snook or attempt to take their first tarpon on fly in the morning and be enjoying family time with the wife and kids catching a variety of species on nearly every cast the same afternoon. There are four distinct inshore fishing venues in the Sebastian Area; let’s see what they have to offer in the month of March.

Trout fishing has been excellent this winter, with large numbers of average size fish as well as a good number of “gator” sized trout being reported. The larger trout start to move into the shallows in March and if the water is clear, you can see them sunning on sand and mud bottomed flats or in potholes on the newly rejuvenated grass flats. Redfish have been sparse in the Sebastian area this winter, but as the grass beds regrow with the warmer waters and longer day lengths of the spring season, more reds should feel at home here. Until the sea grass makes a substantial recovery, hopefully by later this spring, the mangroves and spoil islands will be the place to look for trout and reds as well as some of the snook that are moving into the area from down south. There will be action fishing for vacationing families with ladyfish, jacks, blues and small trout around the inlet, spoil islands and the mouth of the Sebastian River.

Sebastian Inlet has historically been a great spot to find a double-digit jack crevalle in March. These bruisers are a big hit with vacationing anglers because of their unrelenting fight and aggressive attitude toward a live bait or artificial lure. If the bluefish allow your baits to get down to the jacks, hang on for a memorable battle. Inlet anglers usually get a last shot at pompano and flounder in March along with blues and mackerel. The big redfish are always a possibility in March and snook fishing can be very good as well.

The waters from the beach on out a few miles can be very productive in March if the winds allow boaters and surf fishermen the opportunity to fish them. Surf fishermen target pompano, bluefish and mackerel as they begin their northern migration. Boaters can do the same and keep an eye out for cruising cobia and large schools of jack crevalle. Sharks, bonito and king mackerel can also join the beach party in late march.

Take advantage of Florida’s early spring and get the family out on the water. For more information, check out the frequently updated videos at www.youtube.com/user/Captaingusbrugger. 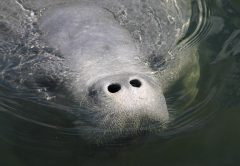 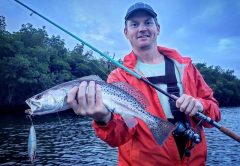 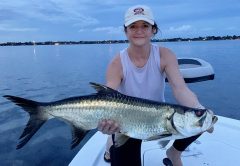 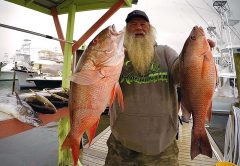