The annual Sebastian Exchange Club Foundation’s Blue Water Open Charity Offshore Fishing Tournament was held on June 5, with a field of 122 boats vying for the $20,000 guaranteed payout. The bite was a little off due to a confused sea with three-to-four-foot seas and a stiff 10-to-15 knot wind out of the southeast. Trollers had a tough time because of very scattered weed, and bottom fishermen had a strong current to deal with. Only 44 boats weighed in fish at Capt. Hiram’s tournament headquarters, although there were some nice catches. Dolphin and kingfish dominated the board until near the end when several nice grouper were recorded.

The main-board fish included dolphin, kingfish, grouper and wahoo, with four places in each category. Also included was a bonus board with an additional 15 places, giving anglers who didn’t quite make the mainboard another chance to collect some winnings.

The boat The Other Woman took top dolphin with a 31.38-pound beauty, followed by Tormentor with 25.67 pounds, third place going to Miss Possum with 18.40 pounds and Mixed Emoceans in fourth with 18.29 pounds.  The biggest kingfish weighed in at an impressive 46.49 pounds, caught aboard Easy Drinkin.  Second place king was 34.43 pounds caught on Sundance Kid, third place was 33.94 pounds caught on Little Debbie, and Fish Reaper with a 26.07 pounder rounding out fourth place kingfish.

First place and second place grouper were only separated by two and a half ounces, top winner going to Signed In with a 20.63 pounder.  The 20.36 pound second place grouper was caught on Reef Affliction, third place went to Big Country with a 17.19 pound fish, and fourth place was 14.93 pounds caught aboard Reef Thief.  That two-and-a-half-ounce lead for top grouper also landed Signed In the Capt. William Charles Memorial Largest Grouper Award of $1,000, donated by Carol Knapstein. That’s fishing for you!  There were no wahoo caught.

The Top Boat Award is based on an aggregate weight of three fish in at least two main-board categories. The 2021 BWO Top Boat Award went to Knot Scared with an aggregate weight of 43.97 pounds, for a nice $2,500 prize. Two “Bonus” Fish, amberjack and cobia, pays out $1,000 each for the single heaviest fish. The Top Amberjack Award went to Legal Limit this year, with a hefty 45.47 pounder. No cobia were caught this year.

For complete tournament results, visit www.bluewateropen.com or like Sebastian Blue Water Open on Facebook.  The Sebastian Exchange Club has raised over $750,000 over the years through the Blue Water Open.  All proceeds go to worthy charities in the local community with a special emphasis on the prevention of child abuse. 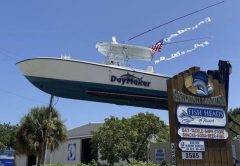