It has been an action-packed summer fishing on Sebastian’s inshore and nearshore waters. The inshore snook fishing has been very consistent, the trout have been available even on the hottest days and juvenile tarpon remain abundant throughout the lagoon and its tributaries. Snook are again in season as of September 1. Atlantic zone rules apply, with one snook overall length between 28 and 32 inches allowed per angler per day. Snook take center stage in the Sebastian area in September, but they are not the only gamefish in town. Let’s take a look at each Sebastian area opportunity available to the inshore angler.

Tarpon and snook action in the Sebastian River will pick up considerably when the schools of finger mullet make their way into the river system. Sight cast live finger mullet, D.O.A. TerrorEyz and MirrOlure Catch 2000 Jr.’s and flies to rolling tarpon. D.O.A. Shrimp and jerk baits along with suspending and topwater plugs are excellent choices for snook around docks and shorelines. A live mullet is hard to beat for snook early and late in the day and at night.

Snook will ambush bait around shoreline structure including dock and mangroves, while trout and reds stalk the flats and spoil islands for a finger mullet meal. Topwater and suspending plugs, such as Super Spook Jr. and Catch 2000 Jr. are very productive this time of year. D.O.A. jerk baits and shads will get you through just about any late summer situation in the central lagoon. Look for juvenile tarpon in residential canals, spillways, and backwater bays.

Sebastian Inlet will be the destination of anglers from near and far come Sept. 1 with the opening of snook season. The snook will be stacked up in the inlet and some years the oversize reds outnumber the snook in September. Live croakers, pigfish, shrimp and finger mullet will all get the attention of predators at the inlet. The tips of the jetties, the channel east of A1A and the north and south shorelines west of A1A will hold snook. Live bait is the ticket during the day, but after dark shore bound anglers predominantly throw bucktails, swimbaits and various diving plugs.

The waters within two miles of the beach north and south of Sebastian Inlet can be explosive in September. Snook, tarpon, kingfish, blues, Spanish macs, cobia, tripletail, sharks, jacks, and flounder all follow the migrating mullet southward. Fish live mullet, plugs, spoons and jigs from the beach to take advantage of some of the best fishing of the year. Take a boat ride up or down the beach a safe distance outside of the breakers and watch for rolling tarpon or other predators chasing the mullet schools. A live mullet or a well place plug should result in a tight line. 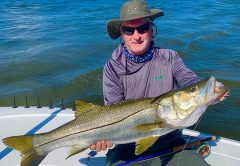 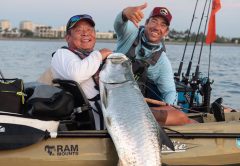 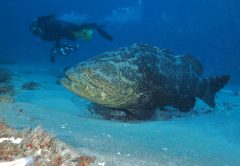 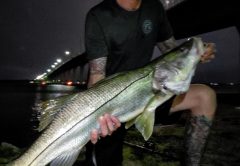