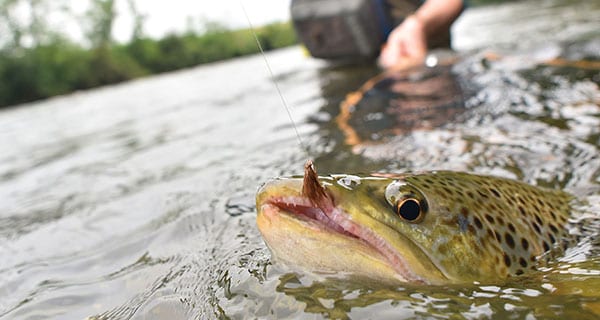 A few years back, I took a trout fisherman out to bass fish for the first time. He bought a 7 wt. rod and a bass taper WF line to balance it. The plan was for me to be paddle boy in the canoe and he was going to catch more fish in a day than he ever had. It ended up that way; however, right at the beginning of the day, there was some difficulty. How do you tell someone who is a better trout fisherman than you that they are doing something wrong? Let them get frustrated and then tell them you want to change the fly and make some adjustments.

So what do you think was wrong with the situation? We had a great caster, no wind to speak of, and the right fly. It was the equipment. The leader was a trout type leader: 9 foot 4X and we were casting a big bass popper. All we had to do was cut about 2 feet of line off the tapered end, and now we have about a 1X. With a big bulky fly, we need more of a mass profile in the leader to help turn over the fly. With bass, we don’t need to make gentle presentations, so a shorter leader is generally a safe bet.

So let’s look at the other end of the spectrum; when we are using a weighted fly. If we have a 7 foot leader and are casting with a 0X or 1X, the fly will tend to kick over or to the side due to the energy of the fly line leader not dissipating the energy. The answer to that is to lengthen the leader, and if you can, drop down in the diameter of the tippet. Maybe a foot or two of a 2X or 3X will do it.

Watch what the fly is doing on a consistent basis. Is it not making the target because the line is collapsing? Is it going off target at the last second? These are generally leader issues. They don’t take long to fix, and it is worth it. Now you can buy leaders designed for whatever you are going for or the type fly you are using. Just make sure you switch out if you switch situations.

So, back to my buddy, who was a great trout fisherman and caster. All we had to do was cut a few feet off his leader, and he was casting like a champ, hitting the target and catching fish. The only downside is he started calling me paddle boy.