Winter has now hit the area and as water temperatures cool off, spearfishing heats up. It seems like my entire year leads up to these few magical months of bluewater hunting. Without a doubt, there is nothing easy about hunting pelagic bluewater fish. For most freedivers, our relationship with wahoo has become more of a love/hate situation. I love the hunt, their majestic nature, and of course a freezer full of that premium sushi meat. However, on the flip side, getting that freezer full of meat is a daunting task for most divers. 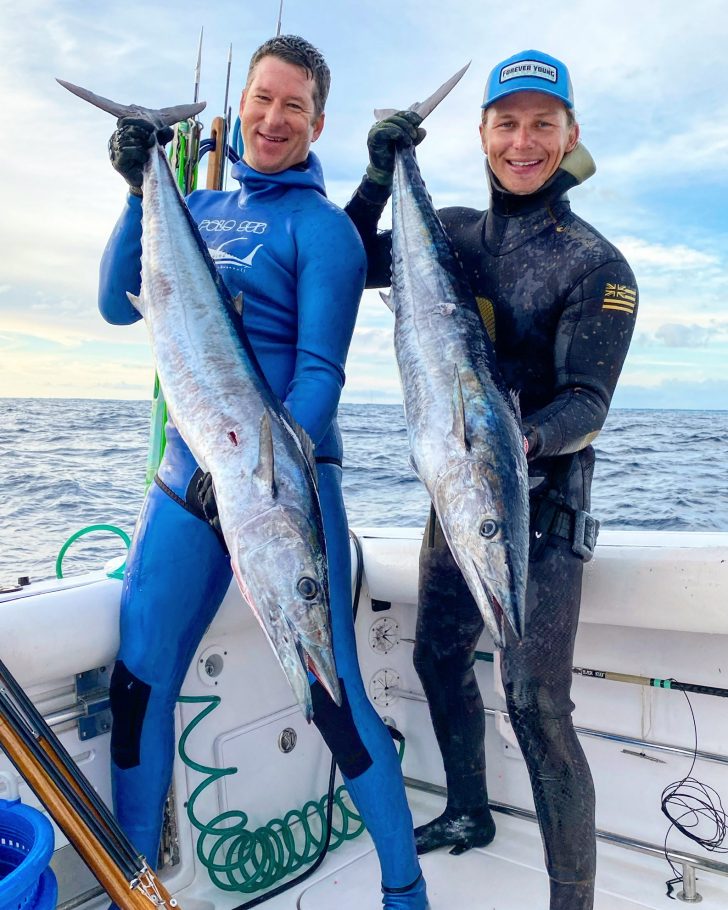 Years ago, myself and a few friends decided we wanted to learn how to effectively hunt wahoo. This was before the Youtube how-to videos, magazine articles, and all the other information that is available today. Truthfully, it took two seasons and most of the time we were just burning fuel and countless hours trying to figure out a pattern for these fish. It took time, years at that, but we did figure out a basic formula to follow and it still holds true today. Fortunately for anyone looking to get started in the passionate chase of bluewater spearfishing, there are now mountains of resources to seek out! It has been a few years since I have written any articles on wahoo/pelagic spearfishing, so it made sense to focus on the recent changes in the fishery that will help you be successful. Not what gear to buy or how to find fish, my focus is more on what to do when you get that moment you’ve been waiting for.

It’s not a secret, everything has changed over the past few years. More people live near the water, more people have access to the water, and local fishers have adjusted to the new pressures they face. Years back, Wahoo acted just like you see on the videos. They would swim right up on the flashy piece of metal dangling on a string from the surface, while they pondered on if it was food or not a diver could dive down and place an easy shot. In my opinion these times are over, pressure has taught these fish to avoid divers and sometimes even their flashers. Wahoo have been around a long time and they will continue to evolve and adjust to their predators like they always have. While they learn and pattern our moves, we must also adjust our techniques to stay a step ahead. I see a lot of people chasing hard after the fish, swimming in circles, slapping the surface, and throwing everything they have at them. This may be effective in other areas, however it doesn’t seem to work well here. When you see a wahoo and make your dive, that fish will come to a decision on what to do based on how you approach and portray yourself in the water. These fish know what we are doing and if they associate you as a diver that has shot at them in the past, they will avoid you. From what I’ve seen in recent years, divers that rush down and try and get a quick shot before the fish swims away, rarely land the fish. Those divers that quietly enter the water, slowly approach, and wait get the kill. This isn’t exactly what everyone wants to hear, one of the attractions to wahoo is that they are beautiful big fish that you can shoot near the surface. Many like hunting them because it’s a trophy fish that they believe doesn’t require a lot of breath holding or depth skill. However, this is not true; those divers that can quietly approach and hold for a few minutes while the fish gets comfortable, often land their kill every drop they take.

Two or three years ago I missed a Wahoo from what I thought was a guaranteed shot, following my advice laid out above and took a relaxed shot during a long dive. I did get a nice fish this day but missed what I found out later would have been the largest wahoo of my life. After reviewing the footage, I made a mistake by breaking one of my foundational rules of hunting wahoo. That rule being never take a shot until you can see the fine detail of the fish. The stripes on their side, the curve of their lateral line, and the detail in the eye.

When you see all this, you are close enough to shoot. Most of the fish we kill are between 35-45 pounds, which the fish I missed would have been if I hit it. However, the water was so clear that day and I did not wait to see the fine detail in the fish, I missed it. The footage revealed the fact that this fish was much larger than I had thought, likely around 80-90 pounds.

He had a ton of mass and a belly on him like no other fish I have seen. My shot fell short and I watched him light up and swim away, to this day I know the mistake I made and haven’t made it again. Bluewater spearfishing is exactly what it is labeled as, hunting in clean blue water. It will make a 90 pound out of range Wahoo look like a 40 pound in range Wahoo. Approach slowly, don’t rush the shot, and pull the trigger when you can see the fine detail in the fish.

It happens, fish don’t always give you a shot, no matter what you do it sometimes just doesn’t work out. If that is the case, don’t just go for it. I hear all the time, “they were swimming away and I figured it was now or never.” If you don’t feel good about the shot, don’t take it, you will not land the fish. Know this, once you pull the trigger, that fish is as good as gone. You’ll watch him swim away, better educated for the next time he runs into a diver. When you find a spot that has wahoo, it’s because they are there for a reason. If you remain relaxed in the water and don’t pose a threat, you can do multiple drifts hunting the same fish. The right shot will come and your patience will pay off. If your shot doesn’t feel good, surface and reset, you will see them again.

Wahoo and other pelagic bluewater fish are hands down some of the most delicious, beautiful, and fun fish to hunt. They require a ton of gear, yield a lot of meat, and make beautiful trophies! As these fish continue to be pressured, we need to always stay a step ahead. When your chance does come, all of your hard work will be worth it. Hunting wahoo is a journey, there is nothing easy about it. Every fish I land is a true blessing and no matter what I come back to the dock with, the time drifting in blue water is priceless. The more patience people have in the water and with each other will allow us all to kill more fish. Relax on the water, around other boats, and on your dives. Approach the fish slowly, keep your heart rate down, and don’t pose a threat to the fish. When your chance on a wahoo starts to unfold, wait for the right moment, see the detail in your fish and place a shot that feels good before you pull the trigger. Enjoy every moment of the kill and all the meals to come!