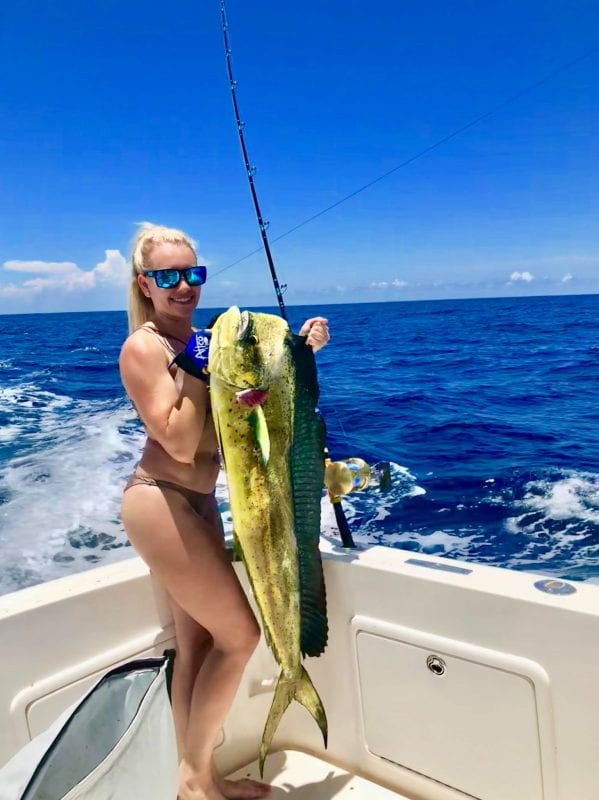 To Offshore fisherman nothing marks the arrival of spring like Mahi or as they are commonly called Dolphin. There is no disputing they are the number one fish of choice for blue water anglers around the first coast. Not only do they provide spectacular bites they are tasty as well. When, where and how are the commonly asked questions.

April is usually the month of the Mahi run. It varies from early to mid-April form year to year but  they will show up in force sometime this month.

Where is a little trickier? As a rule early means deep. . I normally look for current edges or temperature breaks beyond the shelf edge

in 400 to 1200 ft. As the month progresses look for those same breaks to be from 140 to 240 ft. Obviously any change is worth stopping on especially if it has current and weed. If there isn’t any kind of change then the best place is on the edge. Of the continental shelf, commonly called the big ledge.

How is no big secret but there are some things you can do to increase your probability of success? Elephants eat peanuts which means smaller baits will catch more fish or at least make your hookup ratio better. I prefer naked ballyhoo or sea witch bait combinations when targeting Mahi. They are not hard to hook you just need to let them eat it. We pull 8 lines so it is important to keep as many baits fishing as possible. It is no secret that one usually means more, so don’t be in a hurry to clear all your lines when you hook the first fish. Teasers are important as well. Anything that gets the attention of a hungry Mahi will work. The old tried and true daisy chain of squid works great. Make sure you have a bait positioned behind the teaser that you can crank up to the fish when you take away the fake food. There is nothing better than a hungry Mahi blowing up on the teaser and crashing the bait.

Remember Elephants eat peanuts so don’t be surprised when a Blue Marlin comes into your spread and inhales a medium ballyhoo that you had out for a Mahi. That’s really why we go to the Gulf Stream