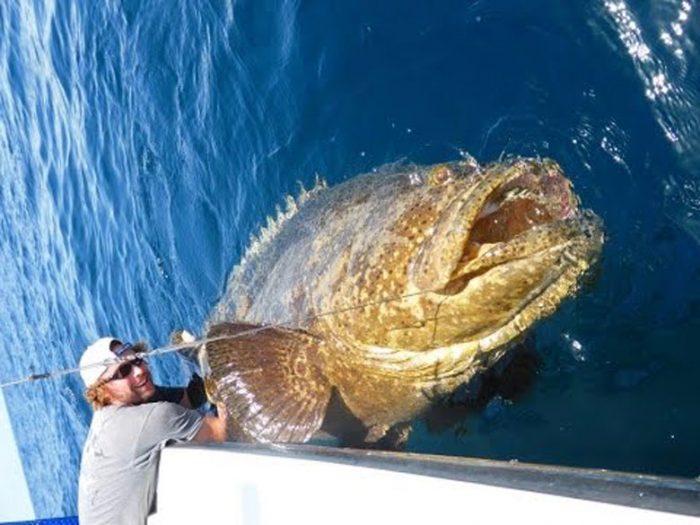 Boys and girls of Fish World, lots of great things are happening here in the waters of southwest Florida, big-huge things. Goliath Grouper, a.k.a. “Jew” Fish, are biting in the canals and in the passes. These monster fish can reach 8 feet long and weigh 700 to 800 pounds, and they are cooperating nicely. Goliath Grouper are one of the local species of grouper which grow up in the shallow water of the mangrove trees then as they get larger move out into the Gulf to live.   It wasn’t too many years ago we first started finding-catching in our canals small grouper looking fish with some less than 6 inches long. These fish were brown with spots varying from dark brown, red, or maybe even yellowish in color. It took quite a while to figure out what type of grouper they were for this was just before the internet came along and back then you had to use dial up. I’ll let your parents explain that one. Eventually I found a book where I learned that those round caudal and pectoral fins of the Goliath make its I.D. possible. Another identifying feature of Goliaths is that it has two sets of dorsal fins and the first set of fins are shorter than the second set of fins.

We would later learn that Goliaths like many Gulf species spawn in the summer months near offshore near wrecks, rock ledges and isolated reef patches. After the eggs hatch the young migrate into our inshore canals and mangrove swamps where they begin to grow. Typically males begin to spawn at 5-6 years of age whereas females require another year or two and begin to spawn at 6-7 years of age. Adult Goliaths are known to reach 40 years of age and some are thought to live beyond 50-years and possibly up to 100 years old.

Young Goliaths will stay within the inshore creeks and canal systems until they reach about 4-ft in length and weigh 40-50 lbs. After that it’s time for them to move out into the passes and other deep water areas. Boca Grande Pass is the preferred pass and the old phosphate dock has lots of heavy cover for them. Goliaths are pretty lazy and prefer to stay close to home where they can hide and picked up food as it passes them. Rarely do you find these grouper in open water areas with sandy bottoms.

In the canals, the difference between fishing for Snook and Goliath Grouper is the time you spend soaking your bait under the docks. Both fish like to live under docks and near structure but Snook are predatory in nature so they will seek out and ambush their prey while Goliaths are lazier and will meander and scavenge for their food. So if your fishing for a grouper, flatten the barb of your hook, these are catch and release only fish, secure a chuck of mullet or ladyfish to the hook, and throw it underneath the dock towards the middle and let it sit there and soak. If a Goliath is nearby, he will find it.

Out by the phosphate dock at Boca Pass the technique is a bit different. You’ll need a boat to get there and the outside of the pilings or the large round tie-up bumpers is where you’ll find the big boys. To be successful here you’ll need to beef up you tackle and use a 2 or 3 pound fish with a 13/0 circle hook or larger with 200 pound test mono leader. Depending on the current sometimes you’ll need up to a 10 ounce sinker slid onto the line before the hook to keep your bait near the bottom. Then you’ll need a big rod like a Bill Fisher in the 80 to130 pound class and an International 50 Big Game Reel with 100-lb mono on it. Being that you’re targeting a monster fish, this will be a team effort. The angler needs to be at the bow of the boat and the operator of the boat needs to put the nose of the boat up close to the dock. Drop the bait to the bottom and as soon as the angler feels the fish bite the boat operator has to put it in reverse and pull the fish away from the piling into open water. This has to happen before the fish figures out what you are trying to do and he decides to pull back. It’s important that the driver of the boat never leaves the helm for there is little time to react.

If the Goliath gets back into its lair, it’s over. If you can, have a backup person helping the angler to hold on tight for a pissed-off 300-lb fish is going to have some real fight in him. So if you’re lucky to get the grouper away from its home then it’s a simple matter of who can pull the hardest for the longest period of time. If the person operating the boat and the person on the rod work together you should be successful. This is a team effort and not a case of the angler gets all the glory and the boat operator gets yelled at if the fish gets back into the pilings. So remember to congratulate the boat operator and any other supporting cast members and include them in that prize photo.  I just thought I’d share one of the more unusual possibilities here in North Fort Myers and a secret of Charlotte Harbor.
Good Luck