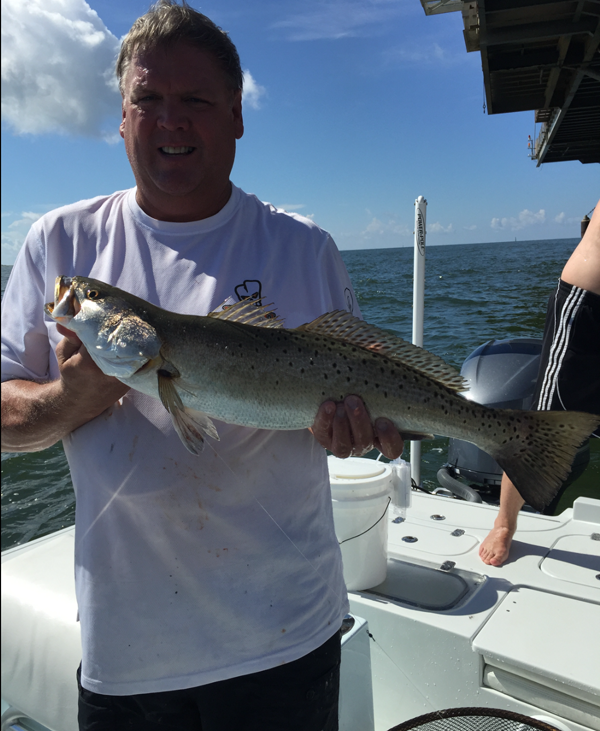 Temperature wise, October will start off warm and end up much cooler. The summertime pattern will persist until the first cool fronts appear mid to late month. Early in the month we will still be catching Speckled Trout, redfish and a bunch of White Trout around the lower bay rigs, on deeper structure and all up and down the bay, in the marshes and around the small islands in the sound. They can also be found around the rivers that dump into the bays and Mississippi Sound. The trout will continue this pattern until the weather cools off. As that happens they will migrate North into the marshes and the upper Mobile Bay Delta area where they will hold through the Winter months. I will continue to fish live shrimp under a popping cork early in the shallows and then as we progress to the deeper water, I will fish with a slip cork rig or even a tight line on the bottom. The redfish will be around some of the bay rigs now and can be found in the Grand Bay area and the Portersville Bay and Heron Bay areas as well. They will hit live bait as well as the plastic shrimp or mullet imitation baits like the VuDu Shrimp or the Egret Bait Mambo Mullet. I really like to use live finger mullet under a rattling cork now but the redfish will also quickly take a fresh dead shrimp on the bottom. The triple tail or blackfish will be here as well until the water cools off and can be found around floating debris in the Gulf, Bays and Sound as will the ling or cobia as they migrate back to South Florida for the Winter. This is also the time of year the Flounder start to move offshore as well. Fish for them around the rigs, rocky areas and points on the bottom with a bull or mud minnow, small croaker or shrimp rigged in a Carolina rig fashion.

All in all, October is one of the best months for inshore fishing here on the coast

Until next time, tight lines, and good fishing to you,